Earlier this month, Deepika Padukone left for Goa where she is shooting for Shakun Batra's film 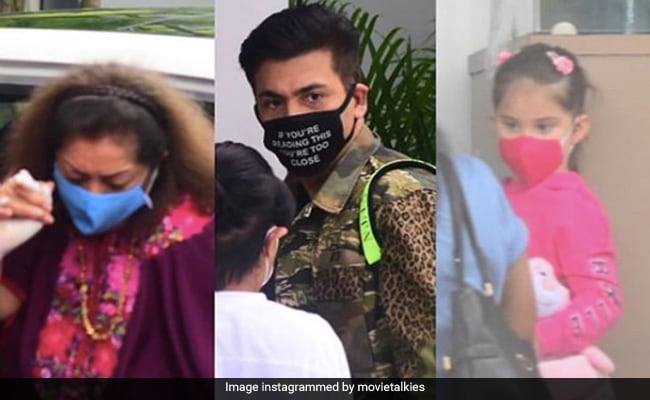 Karan Johar with family at the Mumbai airport. (courtesy: movietalkies)

Filmmaker Karan Johar was photographed at a private airport in Mumbai, where he was accompanied by his mother Hiroo Johar, and his kids Yash and Roohi. Karan Johar will reportedly be in Goa for work. Earlier this month, Deepika Padukone left for Goa for the shooting of the untitled film, which is being directed by Shakun Batra and is being produced by Karan Johar. The film also stars Gully Boy actor Siddhant Chaturvedi and Ananya Panday. Karan Johar was seen wearing a black mask, which had the text "If you are reading this, you're too close," printed on it. Several fan clubs shared pictures of Karan Johar and his family at the airport.

The filmmaker is also set to launch a picture book for kids titled The Big Thoughts Of Little Luv, which is inspired by his experiences as a single parent. Karan Johar welcomed Yash and Roohi via surrogacy in the year 2017. He announced the project last month. He wrote: "Am excited to share something special with all of you... my first picture book for kids The Big Thoughts Of Little Luv. Coming soon." The book will be published by Juggernaut Books.

Karan Johar's upcoming ventures as a producer include Sooryavanshi, Dostana 2, and Brahmastra. His last project as a producer for Gunjan Saxena: The Kargil Girl, starring Janhvi Kapoor, which released on Netflix last month.