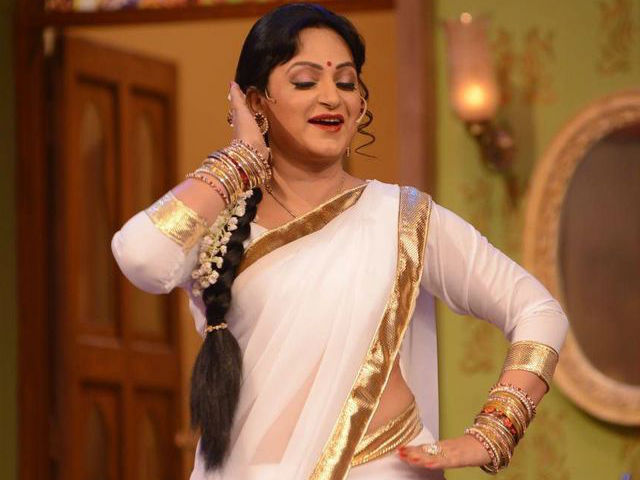 Upasna Singh in a still from the show.

New Delhi: Television actress Upasna Singh is back on The Kapil Sharma Show and she hopes that her former colleague, comedian Sunil Grover will also join the cast soon. The actress told Times Of India: "Yes, I am back on the show. I am currently shooting for the show. I have already shot an episode and looking forward to it." Upasna, who played Kapil's Pinky Bua, quit The Kapil Sharma Show last year in June but now she's back as a new character. Meanwhile, Sunil Grover quit Kapil's show last month after an alleged mid-air altercation. Kapil Sharma allegedly abused Sunil Grover while they were travelling with the entire team from Australia to India, last month. "Kapil and Sunil have been thick friends. They know each other since a long time and shared a great rapport. It was very unfortunate that such a thing happened between them, but I feel everything will be fine. I want them to patch up," Upasna told Times Of India.

After the incident, Kapil Sharma apologised to Sunil Grover on Twitter. But Mr Grover snubbed Mr Sharma's apology and asked him not to act like "God." Sunil Grover quit the show and refuted all reports of a future collaboration. Sunil Grover also did a live gig in New Delhi and appeared as Dr Mashoor Gulati and Rinku Bhabhi (his onscreen roles) on Indian Idol 9 grand finale, earlier this month. After two successful performances, Mr Grover reiterated that he will not return to The Kapil Sharma Show. "My intentions are to act and to entertain with dignity. For me, money can't be the only reason to do something, or not to do something, (sic)" he tweeted. He recently took an alleged dig at Kapil Sharma with this Instagram post:

But Upasna Singh believes that this feud will be over soon. "We are like a family and every family goes through ups and downs and have their share of fights. However, in the end, everyone comes together. I feel they will become friends again," she told TOI.

Promoted
Listen to the latest songs, only on JioSaavn.com
Meanwhile, there are also reports of a new programme (with Sunil Grover in lead) on the same channel which airs Kapil Sharma's show. Upasna said that she's not heard of any such thing and that she is "committed to one show at a time." The actress told TOI: "I have not heard anything like that and I don't think there can be two shows on same lines. Also, I believe being committed to one show at a time."