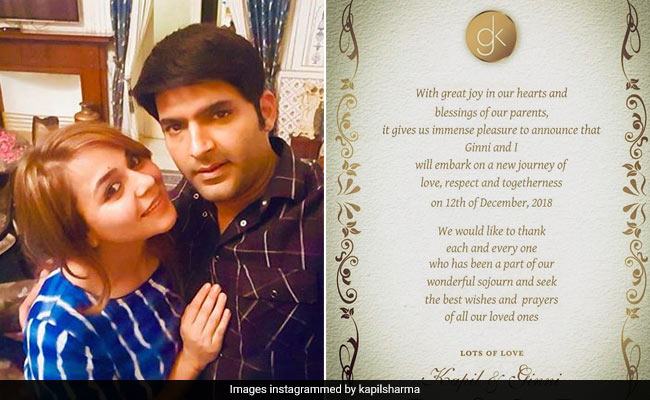 Preparations are in full swing for actor-comedian Kapil Sharma and Ginni Chatrath's wedding, which is scheduled for December 12. Kapil Sharma shared a glimpse of his wedding invite on social media on Tuesday and captioned it: "Need your blessings." "With great joy in our hearts and blessings of our parents, it gives us immense pleasure to announce that Ginni and I will embark on new journey of love, respect and togetherness on 12th December, 2018," read an excerpt from the wedding invite posted by Kapil Sharma. "We would like to thank each and every one who has been a part of our wonderful sojourn and seek the best wishes and prayers of all our loved ones," the invite further read. The stand-up comedian announced his wedding to Ginni last month. He had revealed that the impending wedding, which will take place in Ginni's hometown Jalandhar, will be followed by a reception in Amritsar on December 14. The couple will reportedly host a reception in Mumbai for industry colleagues and friends on December 24.

Kapil Sharma had introduced Ginni Chatrath as his girlfriend on social media in 2017. Speaking about his impending wedding to Ginni, Kapil in an earlier interview to Hindustan Times had said that the marriage will bring a "huge change" in his life. "I am ecstatic to be with Ginni and I know this marriage will be a huge change in my life. Discipline aayega. She takes good care of me and is a huge support in my life."

On the work front, Kapil Sharma will be back on the television with a new show, nine months after Family Time With Kapil Sharma (his last show) went off air. According to reports, Kapil Sharma's show will premiere on December 23, just a day before his reported Mumbai reception.