Kapil Sharma Is No Longer Late On Set. 'The Ginni Effect,' According To Juhi Chawla 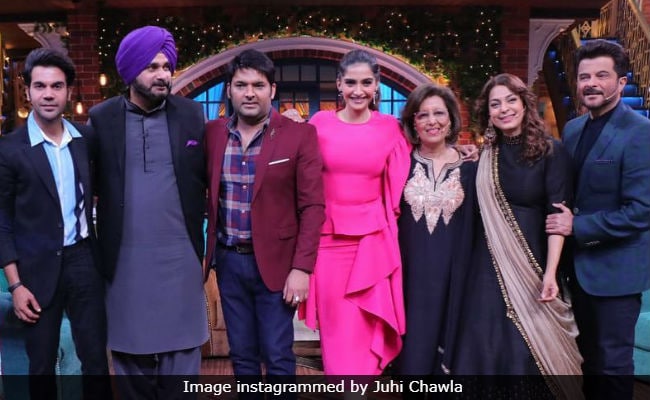 It appears that comedian Kapil Sharma has redeemed his reputation and he no longer makes his guests wait before shooting episodes of The Kapil Sharma Show, reports India Today. Kapil's latest guest Juhi Chawla said that earlier Kapil shot between 11 pm and 3 am but for the promotion of her upcoming film Ek Ladki Ko Dekha Toh Aisa Laga, Juhi had to catch up with Kapil Sharma around 7 pm as he was already on the sets waiting for his guests. When she inquired about this change in shoot timing, a crew member said that Kapil has to return home by 10 pm, which Juhi Chawla said was "the Ginni effect." Ginni Chatrath is Kapil Sharma's wife.

For the promotion of Ek Ladki Ko Dekha Toh Aisa Laga, Juhi Chawla accompanied Anil Kapoor, Sonam Kapoor and Rajkummar Rao. She shared these BTS pictures from the sets of the show on Instagram:

Meanwhile, Kapil Sharma, who married longtime girlfriend Ginni Chatrath in December 2018, returned to the small screen with a new season of The Kapil Sharma Show after a hiatus of nine months. In March 2018, Kapil's show Family Time With Kapil Sharma was pulled down after airing only three episodes because of Kapil's deteriorating health.

At that time, Kapil Sharma frequently trended for cancelling shoots and arriving late on sets after his guests. Last year, Kapil briefly checked into a rehabilitation centre to battle alcoholism.