Apurva Asrani said: "You give your all because she seems lovely. Then when you're ready... she has you thrown out" 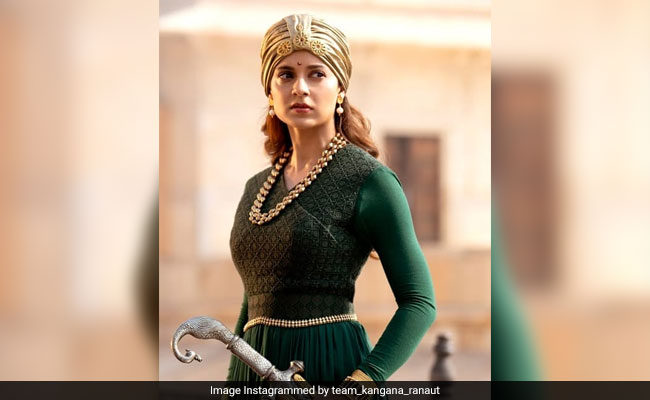 Kangana Ranaut in a still from Manikarnika. (Image courtesy: Instagram)

The Manikarnika row, in which Krish is contesting Kangana's claim as the film's primary director, has re-opened a two-year-old Simran controversy, in which writer Apurva Asrani cried foul over Kangana sharing writing credits for the Hansal Mehta-directed film. In a Twitter conversation with Pooja Bhatt, who sided with Krish over the Manikarnika controversy (more about the later), Mr Asrani said that he "yearned" for her support when he left out to dry by his team in 2017. To this, Pooja said: "I'm sorry if it seemed like I was being reticent with regards to my support then... Though, I always maintained that Hansal's silence felt odd and rather unjust." Mr Asrani's searing reply read: "Her (Kangana Ranaut) game is brutal. She first plays the victim and wins your trust. You give your all... sacrifice all other work, because she seems lovely. Then when you're ready with a film you nurtured/created, she has you thrown out. Then she uses the press and trolls to character assassinate you."

Her game is brutal. She first plays the victim & wins your trust. You give your all, sacrifice all other work, because she seems lovely. Then when you're ready with a film you nurtured/created, she has you thrown out. Then she uses the press & trolls to character assasinate you. https://t.co/TehVA7NyGR

After the Manikarnika row, the Internet also recounted the days leading up to the release of Simran when Apurva Asrani trended for calling Kangana out and accusing Hansal Mehta for siding with the actress. Hansal Mehta, who remained tight-lipped then, tweeted his statement in which he said, "Simran is a closed chapter as far as I'm concerned. The details of what really transpired during the film will remain a painful chapter of my life that might find their way in a memoir someday but will never become a source of somebody's vicarious pleasure on social media."

"I chose to remain silent before the film released because there was no way I could sabotage a film that had the efforts of so many people at stake... I did not want to re-live what I had endured. I had to move on for my own sanity," he added.

Many people keep dragging me into the controversies around Kangana Ranaut that seem to erupt from time to time. For the last time - Simran is a closed chapter as far as i am concerned. The details of what really transpired during the film will remain a.. pic.twitter.com/fGafyuxq3Z

Meanwhile, Bollywood appears to be divided over the Manikarnika row, in which Krish claims the 70 per cent of the final cut was shot by him while Kangana's sister Rangoli says the actress made most of the film and if Krish can prove otherwise she'll apologise and retract her name. Speaking about the ongoing controversy, Pooja Bhatt shared Krish's interview with Bollywood Hungama and wrote: "This is so wrong... on every level. Eventually, it is credit we work for... money comes and money goes... the first rule of filmmaking is to acknowledge people's contribution."

Bejoy Nambiar added to Pooja's tweet: "This is just heart-breaking to watch! No one should have to go through something like this. After Simran and Apurva Asrani's episode this is the second time someone is calling her out. Earn your credit and give credit where it's due Kangana Ranaut."

This is just heartbreaking to watch ! No one should have to go through something like this. After #Simran & @Apurvasrani 's episode this is the 2nd time someone is calling her out. EARN your credit & GIVE credit where it's due #KanganaRanauthttps://t.co/nkbEynvBXK

However, Manikarnika writer Prasoon Joshi said that Kangana Ranaut "elevated the film to another level through her direction and commitment. Let not any controversy take that away from her." Actress Ankita Lokhande, who debuted with Manikarnika, without addressing the ongoing feud over directing credits told news agency IANS: "As a director, she was fantastic. It was her debut as a director."

Kangana hasn't only given an outstanding performance she's also elevated thefilm toanother level thru her Direction n commitment.Let not any controversy take that away from her. It's been a tough journey n am all fr celebrating everyone's contribution. Here's 2team #Manikarnika

Simran tanked at the box office but Manikarnika is dominating the ticket window currently. The film has earned close to Rs 50 crore as of Monday.