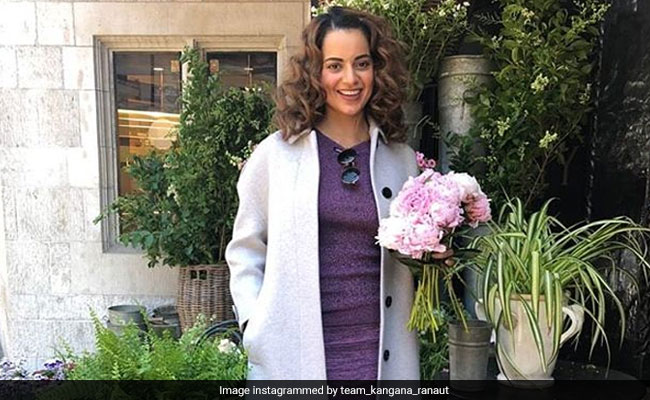 Actress Kangana Ranaut, in a video message on Friday, revealed that she has officially joined Twitter. So far, a verified account called Team Kangana Ranaut had been posting on her behalf - tweets personally written by the actress were signed KR. The profile name has now been changed to just Kangana Ranaut (the handle is still @KanganaTeam). The team's Instagram handle remains unchanged. Kangana Ranaut joins Twitter some months after her sister and manager Rangoli Chandel's account was suspended for violating Twitter's hate speech rules; the past few weeks have also been controversial for Kangana's many and freely expressed opinions, none of them flattering, about her colleagues.

In a video message shared on the account, Kangana Ranaut said she had resisted joining social media thus far despite "pressure" but had a change of heart when she witnessed "the power of social media" after the death of actor Sushant Singh Rajput. Kangana, who said she has rejected endorsements in the past because they required her to be on social media, said she wants to use the platform for "reforms."

Kangana Ranaut has been extremely vocal demanding justice after Sushant's death, triggering support from others online - but she has also been widely criticised for appearing to use the tragedy to settle personal scores with other film fraternity members. In TV interviews, Kangana has called Swara Bhasker and Taapsee Pannu "B-grade actresses"; through the Team Kangana Ranaut account, she has attacked stars such as Deepika Padukone, Ranbir Kapoor, Ayushmann Khurrana and Alia Bhatt. Earlier this week, she was ridiculed for claiming in a tweet that she shared a "genuine" romance with actor Hrithik Roshan and couldn't explain why it ended - Kangana and Hrithik have been engaged in a long and ugly feud over the alleged romance, which Hrithik says never happened.

Till a few months ago, Kangana Ranaut's sister Rangoli Chandel was the one attacking other stars on Twitter - she infamously rounded upon Taapsee Pannu last year after the actress failed to name Kangana in an appreciation tweet for the trailer of her film Judgementall Hai Kya? and then turned on filmmaker Anurag Kashyap when he intervened.

Rangoli's Twitter account was suspended in April after a communally-divisive tweet she posted was reported by several users. Weeks ago, #SuspendTeamKangana trended as well after the posts on Deepika, Ayushmann and other celebrities - the Team Kangana Ranaut handle also had a public argument with actress Kubbra Sait, who tweeted back, "Team Kangana Ranaut, your handle has been toxic. I unfollowed and reported you too. What I personally ask from you is this: Be kind. Be responsible."

The mood after Kangana Ranaut's Twitter announcement was more celebratory, with the hashtag #BollywoodQueenOnTwitter trending. Watch her video message here:

Kangana Ranaut is the star of films such as Queen, Manikarnika: The Queen Of Jhansi, Rangoon, Judgementall Hai Kya, Simran and the Tanu Weds Manu series. Dhaakad and the Jayalalithaa biopic titled Thalaivi are her upcoming movies.