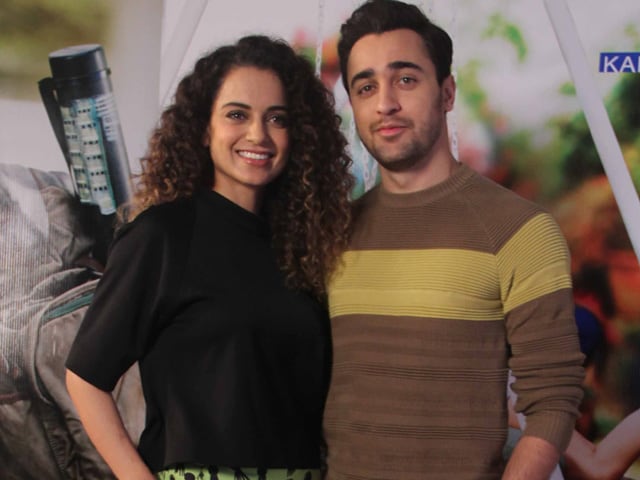 Imran Khan and Kangana Ranaut photographed at an event in Mumbai.

Mumbai: Three days from its release, Katti Batti is hardly the most awaited film this year and we wonder if it has something to do with the fact that both its leading actors - Imran Khan and Kangana Ranaut - are absent from social media.

"Thank God someone asked that question," said director Nikhil Advani at a media interaction in Mumbai on Tuesday. "Please ask them that why is it that they aren't on social media."

Imran's fan page on Twitter has almost 50,000 followers but the star himself has little interest in becoming part of the Twitterati.

"I think that people on social media with the aid of user names, get rather inhuman with their comments. I don't think they would ever behave like that in general," said Imran. (Also Read: Why Imran Khan Didn't Like Katti Batti Script At First)

One of Kangana's many fan clubs too boasts over 45,000 followers but the Tanu Weds Manu star says that she has no time to be on social media.

"I prepared for the character of Datto for six months and I didn't even talk to my mother. When do you think I'll have the time to be on social media," she said.

When it comes to movies, social media provides a platform for the least expensive means of promotions. However, with only three days to go for the romantic-thriller's release, it doesn't look like much is going to change for Imran and Kangana online.

Katti Batti, which stars Imran as Maddy and Kangana as Payal, will hit screens on September 18. (Also Read: Kangana Falls Out of Love With Imran in New Katti Batti Song)