Kangana Ranaut And Rangoli Chandel Are 'Chilling Like Villains' In Manali 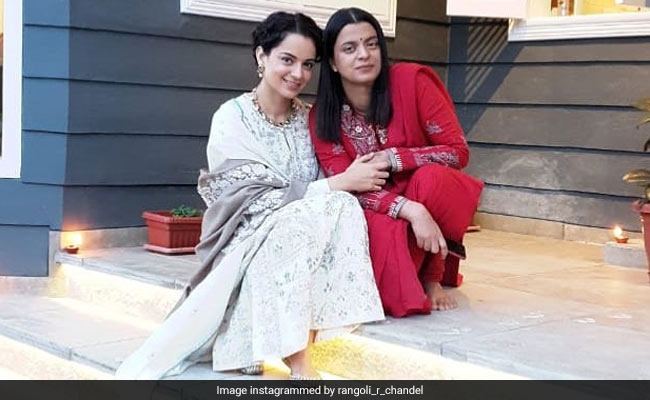 Kangana Ranaut's sister Rangoli Chandel recently shared a video on Twitter, in which the 32-year-old actress can be seen spending quality time along with Rangoli and their parents in their hometown Manali. Sharing the video, Rangoli wrote: "Chilling like villains." She accompanied the post with a few hashtags such as "#summerof2019", "#familytime" and "#Manali". The comment section of the post was flooded with remarks like: "My stars under the sun", "sun-kissed" and "lovely family time." Here is the video shared by Rangoli Chandel:

Rangoli Chandel's posts often feature the Tanu Weds Manu actress. A month back, she posted a picture of Kangana with her son PrithviRaj on Instagram, in which the duo can be seen dressed in matching outfits. In her post, Rangoli wrote: "My Bhikhshus... ha ha. Kangana loves organic fabrics. She gifted PrithviRaj his first organic cotton dress, today afternoon after lunch they both happily posed for me." Take a look at the adorable post Rangoli shared:

My Bhikhshus... ha ha ... Kangana loves organic fabrics, she gifted Prithu his first organic cotton dress, today afternoon after lunch they both happily posed for me ...

Kangana Ranaut frequently visits her hometown. The actress also owns a mansion in Manali. As reported by DNA, she bought the mansion after the success of her 2014 film Queen.

Kangana Ranaut is currently filming Panga, which is being directed by Ashwiny Iyer Tiwari. The film will also feature Richa Chadha, Neena Gupta, Pankaj Tripathi and Jassi Gill. The will also be seen in a biopic on J Jaylalithaa.