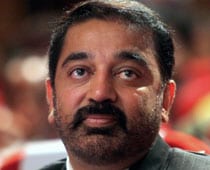 The actor, who secured his first National Film Award in1982 for his role in Moondram Pirai, will spend big daydoing his bit for charity.

According to sources close to the actor's family, as partof the birth day celebration the Padmashree awardee wouldpresent various articles to people, including a laptop tostudents, uniforms to autorickshaw drivers and tailoringmachines to the poor.

The actor will also give an award to the best districtwing of his fan club on the occasion, they said.

The four time National award winner, who has acted in about150 films in various languages, including Tamil, Telugu,Kannada, Malayalam and Hindi has played a myriad of roles inhis five decade long career, including Dasavataram, in whichhe played 10 characters.

Whether it be the role of Palakkad-based Brahmin inMichael Madana Kamarajan or the sickle-wieldingVirumaandi, the rustic villager, he is known to give life tothe character right from body language to pronunciation.

Kamal and controversies, more often than not, go together.

Kamal's Dasavatharam also had to pass legal tangle beforehitting the screen as some religious groups raised objectionsagainst the title as well as some scenes.

In addition to acting and directing, Kamal is also ascreenwriter, songwriter, playback singer, and choreographer.

Promoted
Listen to the latest songs, only on JioSaavn.com
According to reports, Kamal is currently engaged in a filmtitled Manmadhan Ambu, which was directed by K S Ravikumar.

He is turning a lyricist and singer in this film, whichalso features Trisha, Madhavan, Ramesh Arvind in the keyroles.