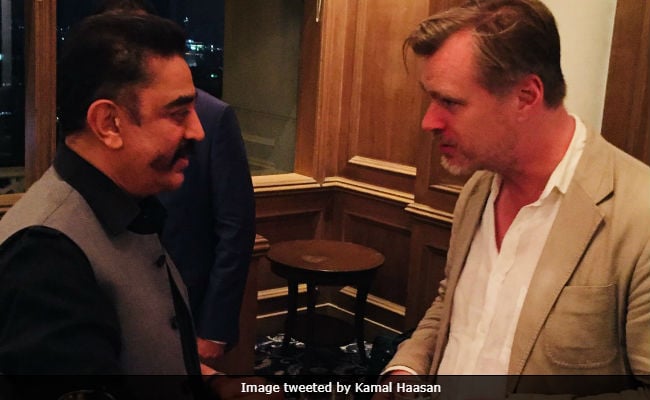 New Delhi: Actor Kamal Haasan was one of the first Indian celebrities to meet Hollywood director Christopher Nolan, who arrived in India on Friday. Kamal Haasan shared a picture from their rendezvous and said: "Met Mr Christopher Nolan. Apologized for seeing Dunkirk in the digital format and in return am sending Hey Ram in digital format for him to see. Was surprised to know he had seen Paapanaasam." Mr Nolan's Oscar-nominated Dunkirk was made on traditional film and originally it was not digital. The purpose Christopher Nolan's India visit is to "draw attention to the importance of celluloid in the digital age," reports news agency IANS.

Met Mr.Christopher Nolan. Apologized for seeing Dunkirk in the digital format and in return am sending Hey Ram in digital format for him to see. Was surprised to know he had seen Paapanaasam. pic.twitter.com/iTPgQOZCMH

Christopher Nolan is here at the invitation of filmmaker and archivist Shivendra Singh Dungarpur, who also founded Film Heritage Foundation. Mr Dungarpur has organised a three-day event for the Interstellar director. "Nolan is coming to India to talk about the advent of celluloid and shooting films in celluloid, something that he prefers. He is also going to talk about how the celluloid medium can co-exist with the digital mode," Mr Dungarpur told IANS before Christopher Nolan's arrival.

Joining the Inception director for the seminar of filmmaking in celluloid will be celebrities such as Amitabh Bachchan, Aamir Khan, Shah Rukh khan, Kamal Haasan, Shyam Benegal, Anurag Kashyap and Farhan Akhtar. A special screening of Dunkirk and Interstellar will be hosted during the seminar, for which the projectors have especially been brought in from the US.

Promoted
Listen to the latest songs, only on JioSaavn.com
Christopher Nolan started his India trip with a visit to the museum with his wife Emma Thomas.