"Feels Like A Party," Writes Kajol As She Returns To Set

In the image shared on Instagram, the actress is seen getting her makeup done. 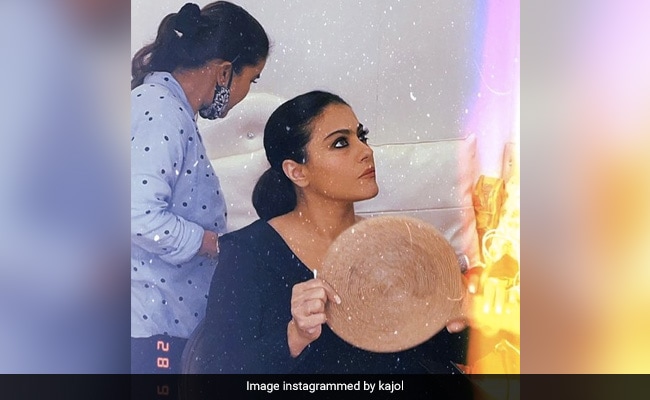 Kajol was born to be a star and anyone who has seen the actress light up the screen with her performances will agree with this. Therefore, it comes as no surprise that the 46-year-old loves her craft and enjoys being on set. After staying away from work due to the COVID-19 pandemic and the subsequent lockdowns, Kajol has returned to work and is overjoyed. She shared her excitement with her fans by posting a behind-the-scenes image from the green room on set. In the photo, the actress is seen getting her makeup done. Dressed in black, Kajol looks beautiful as always.

Sharing her state of mind at being back at work, she wrote in the caption, “The feel of a set after so long is something else. It feels like a party.” Fans, too, seemed to be happy to see the diva back at work. Kajol did not reveal what project she is working on.

Kajol, who has been the heartthrob of the nation since her debut in 1992, is now a social media sensation as well. In addition to her tremendous body of work and stunning looks, the actress also has a sense of humour to thank for this. Kajol's Instagram account is defined by her irreverent and witty takes on the world and her life.

Just last week, the actress shared a video which is a montage of pictures. In it, she is seen embracing her “dramatic” avatar. In the caption, she wrote, “So apparently, I'm dramatic.”

In another post, Kajol is laughing at herself by sharing a meme that features her saying “Hai Bhagwan (Oh God).” The meme was created from her appearance on the celebrity talk show Koffee With Karan. In the caption, she referenced an iconic dialogue from the film Kuch Kuch Hota Hai and wrote, “‘When they tell you Tum nahi samjhogi, Anjali (You won't understand, Anjali)'.”

Kajol is the daughter of actress Tanuja and director Shomu Mukherjee. She made her debut in the film Bekhudi. Her popular films include Dilwale Dulhania Le Jayenge, Kuch Kuch Hota Hai, and Kabhi Khushi Kabhie Gham...among others.