Kajol said: "I'm not as exaggerated as Eela (her character in Helicopter Eela) but I'm partly a helicopter mom" 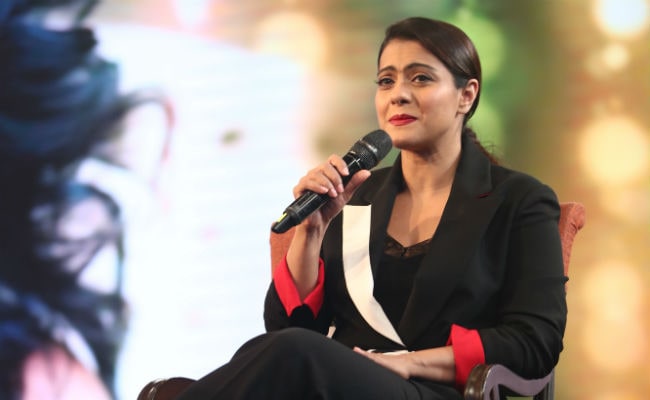 Kajol, who will be next seen in Helicopter Eela, in which she plays the role of an interfering mother of a teenage son, says that she's a little bit like her onscreen character IRL. Kajol was speaking at NDTV Yuva Conclave in New Delhi, where she opened up about her family dynamics. Kajol is married to actor filmmaker Ajay Devgn (who is also producing Kajol's film) and they are parents to a daughter Nysa, 15, and son Yug, 8. Speaking to NDTV's Anjilee Istwal, Kajol said that she is 'partly a helicopter mom' but Ajay Devgn is 'definitely a helicopter dad.' Kajol said, "I'm not as exaggerated as Eela but I'm partly a helicopter mom and happier for it."

Kajol also said that between her and Ajay Devgn she is the bad cop when dealing with their children. "But now he (Ajay Devgn) has realized its important to be a bad cop too and that it's not okay to say okay all the time. He's also understood that he cannot wait for the mom to be a bad cop," Kajol added.

Kajol was asked about her daughter's name, to which Kajol said: "Ajay named Nysa. We had decided to name our daughter Nysa long before she was born." Explaining the significance of Nysa's name, kajol said: "Nysa is the name of the Greek goddess of purity. It was also a settlement on the banks of Indus River at some point. There are many mythological meanings... but it's basically the Greek goddess of purity." Kajol in conversation at NDTV Yuva Conclave in New Delhi

When asked what her definition of a good mother is, Kajol said that everyone thinks that a mother is the personification of sacrifice. But Kajol says, "If your child thinks you're the best mother in the world, you've achieved your status."

At the conclave, Kajol was asked if her children have ever dissuaded her from taking up particular projects or pursuing a career in films altogether. She replied: "My kids have never stopped me from going to work or take or reject a film... My daughter is proud of me and that's my biggest award... that's my biggest recognition."

Kajol's Helicopter Eela is directed by Pradeep Sarkar and it also stars Neha Dhupia and National Award-winning actor Riddhi Sen. The film will open in theatres next month.