Kajol and Ajay Devgn have flown to Maldives for a family vacation. Ajay shared a picture on social media, where the entire family is enjoying their time on the beaches of Maldives 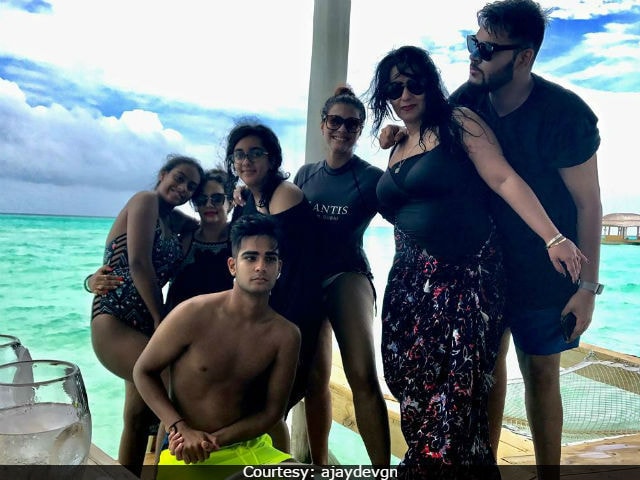 Kajol and daughter Nysa with the family in Maldives (Courtesy: ajaydevgn)

New Delhi: Star couple Kajol, Ajay Devgn and their daughter Nysa have flown to Maldives for a family vacation . Ajay shared a picture on social media, where the entire family is enjoying their time on the beaches of Maldives. "Vitamin F - Family," the Shivaay actor captioned his post. This is a 'much-needed' holiday for Ajay, who a few days ago revealed that he has been working continuously for the past 5 months. "Shooting nonstop since past 5 months. Getting a much needed break, waiting for Rohit to leave for Khatron Ke Khiladi," he wrote on Twitter. The 48-year-old actor is awaiting two releases this year - Baadshaho and Golmaal Again, directed by Rohit Shetty.

Here are some pictures from Kajol and Ajay Devgn's vacation diaries.

Mumbai Mirror reports that the Devgn family has been accompanied by Ajay's sisters, Neelam and Kavita, and their respective families.

Rohit Shetty is currently in Spain to shoot for reality show Khatron Ke Khiladi 8. After he returns, the shooting of Golmaal Again will resume.

Promoted
Listen to the latest songs, only on JioSaavn.com
Meanwhile, Kajol recently wrapped the shooting of her upcoming Tamil film Velaiyilla Pattathari 2 (VIP 2), opposite Dhanush. Currently in the post-production stage, VIP 2 is directed by Rajinikanth's younger daughter Soundarya. With VIP 2, Kajol is making a comeback in the Tamil film industry after two decades. VIP 2 releases on July 28 (Dhanush's birthday).

Kajol and Ajay Devgn married in February 1999. The couple, who co-starred in films like Ishq and Pyar Toh Hona Hi Tha, started dating in 1994. Kajol and Ajay are parents to daughter Nysa, 13, and son Yug, 6.