"Honouring your wife publicly is such an amazing, respectful thing to do," wrote Justin Bieber 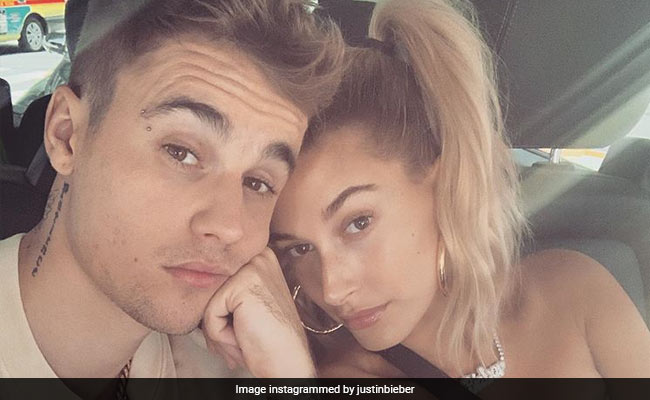 Popstar Justin Bieber Instagrammed a Hailey Baldwin appreciation post recently, which paved way for a user to lecture the 25-year-old singer about social media PDA with his wife. Justin Bieber's calm response to the troll, politely asking the user to unfollow him, was super-liked by Hailey Baldwin, who confessed she couldn't stop blushing. Here's how it began. Justin Bieber Instagrammed an adorable shot of a no-make-up version of Hailey Baldwin and wrote: "No make-up? Like, what?", which prompted a netizen to claim that Justin Bieber's post is a forceful attempt at showing his followers how much he's in love with his wife. "You don't need to do this. If you really love each other, just live and enjoy it without trying to presume to appear or force someone else to see that 'You're in love'," read a comment.

Justin Bieber shut down the troll with a lengthy reply, sternly reminding him that his social media posts are clearly his business and that he wouldn't encourage any unwanted advice: "Honouring your wife publicly is such an amazing, respectful thing to do. It's not only reassuring to her, it's also a way of giving people something to look forward to. I'm not forcing it down anyone's throat. YOU follow ME. Should I not make songs about loving my wife or being in love or is that shoving down my love for her down your throat too? This is my life. Unfollow me if you don't like what I post," read Justin's response.

Meanwhile, the 22-year-old model contributed her share of social media PDA with this comment: "Making a girl blush over here." Aww, you guys. 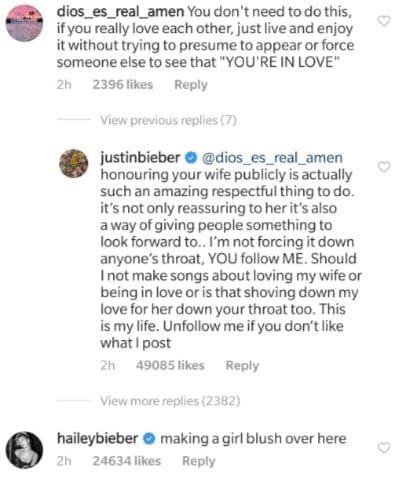 Justin Bieber recently opened up about battling drug abuse at the age of 19, dealing with stardom as a teenage pop sensation, his troubled relationships in the past and fighting suicidal thoughts in a heart-wrenching Instagram post, which went crazy viral.

Justin Bieber and Hailey Baldwin had a secret wedding last year, which he confirmed with a "My wife is awesome" post in November.

Earlier this year, the couple were slammed for their pregnancy prank on April Fool's Day as "insensitive."