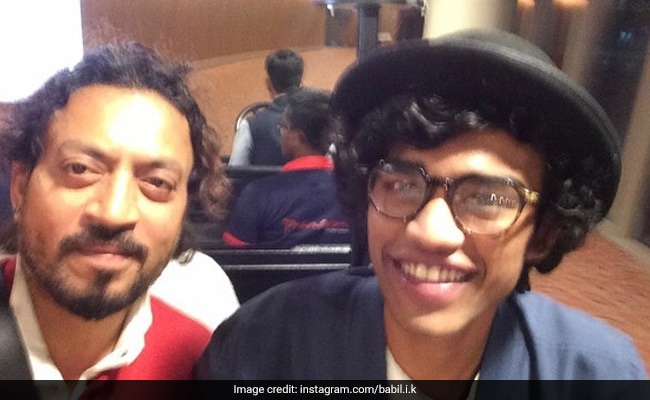 Irrfan Khan's son Babil, on Tuesday, shared another beautiful memory of the late actor and made our day. Irrfan Khan, one of the most loved and respected actors of Bollywood, died on April 29 in Mumbai at the age of 53 last year after a long battle with cancer. Remembering his father, Babil posted two photos that were taken one year apart to show how the father-son tried to look like each other a few years ago. In the first photo, clicked in June 2016, Irrfan Khan's hair can be seen tied back while Babil can be seen sporting curly short hair. The next picture, clicked in June 2017, shows the duo sporting each other's old hairstyles.

Babil often shares priceless throwback pictures of Irrfan Khan from his NSD (National School Of Drama) days. Just a few days ago, he posted a black and white old photo of his father and mother Sutapa Sikdar along with a recent picture of them and wrote: "Mamma and baba in NSD cut to mamma and baba 35 years later."

We also get to see pictures of Irrfan Khan from his early acting days, all thanks to Babil. Remember when he posted a picture of the late actor and Tabu from their film Maqbool and dropped a hint about joining the Indian cinema. "I know it's been a minute. When my superstitions allow me to, I will reveal what I've been busy with, but there's some stuff cooking. Anyway, since I'm obviously extremely frightened on having started my journey in Indian cinema without any formal training on acting and 8 years too early, I often calm my anxieties by looking at baba's pictures from NSD and earlier films. Here's something for his fans."

Irrfan Khan was last seen in Angrezi Medium alongside Kareena Kapoor, Dimple Kapadia and Radhika Madan, among others. He was the star of films like The Namesake, Paan Singh Tomar, Haider, Maqbool, Piku and The Lunchbox.