The photo is from Priyanka and Nick's 2019 beach vacation 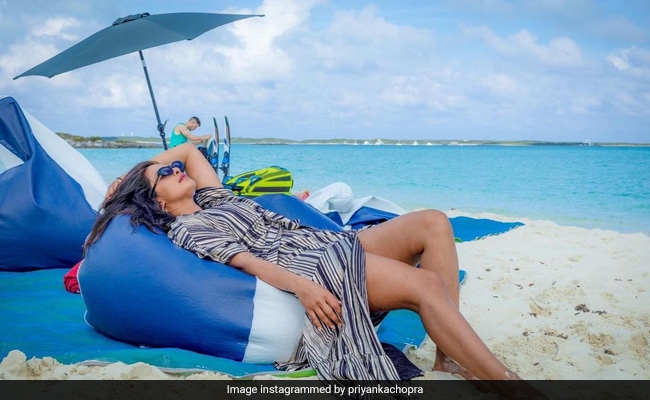 Priyanka Chopra, who is currently in London with her husband Nick Jonas and their families, is surely missing the beach and boat rides. The actress, who occupied the top spot on the list of trends on Sunday after she gave an interview to Oprah Winfrey, shared a throwback picture of herself "dreaming of a boat on an island" with her "guy" - yes, we are talking about Nick Jonas here. The photo is from Priyanka and Nick's 2019 beach vacation that they took with family and close friends. In the photo, the actress can be seen sunbathing in a striped outfit while in the background, we can see Nick Jonas with what appears to be a surf board.

Sharing the photo, Priyanka Chopra wrote: "Dreaming of a boat on an island...with my guy... Nick Jonas...#throwback2019." Check out the actress' post here:

While Priyanka Chopra already mentioned that the picture is from one of her vacations from 2019, we have collected a few of her posts from the aforementioned holiday just for you. Take a look:

Priyanka Chopra, who lives in California, is in London since January. She recently completed the shooting of her new series Citadel.

The actress, talking to Oprah Winfrey about how spent her quarantine period, said: "When the pandemic started in March and we were all told to lockdown, I was in LA and that's where I quarantined for about six months at home and I feel very privileged to say that I kind thrived through the quarantine. I moved into my new home. I had time with my husband and my dogs. I finished writing a book. I have finished two movies and I have released two movies and I have had the ability to just do a lot more with myself which I don't think I had when I was on a flight every single day."

She added: "I felt a sense of grounding to think about what I want to do during this quarantine. I have come out of it feeling insanely grateful for having all I have. It's been a really good time for me."