How cute are these pictures of Tahira and Varushka 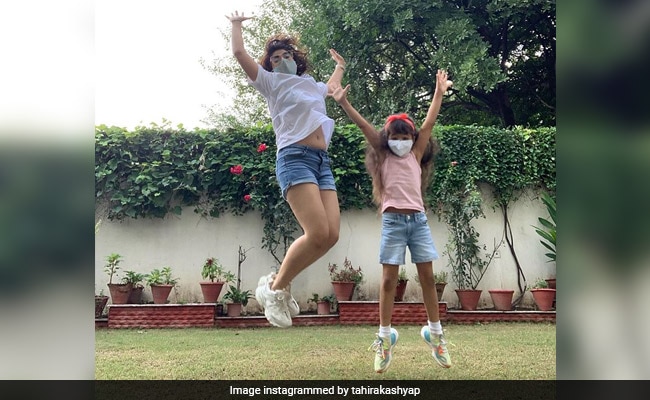 Tahira Kashyap, who is currently in Chandigarh along with her actor husband Ayushmann Khurrana and their kids Virajveer and Varushka are having a great time together (going by Tahira's latest Instagram entry). On Sunday, the filmmaker shared perfect pictures of herself along with daughter Varushka and they have our heart. Dressed in casual outfits, the mother-daughter duo can be seen chilling together, clicking selfies and goofing around. Sharing the pictures on Instagram, Tahira wrote: "Some badass posing on a Sunday with my little one." She added the hashtags #selftimer, #nofilter #badass, #dontmesswithus, #motherdaughter, #gameon and #maskon to her post.

Just some badass posing on a Sunday with my little one! #selftimer #jump #nofilter #badass #dontmesswithus #motherdaughter #gameon #maskon

On Raksha Bandhan this year, Tahira posted super cute pictures of Virajveer and Varushka and she wrote in her caption: "And right after clicking these pictures I was pulling them apart... A fight over ladoo pretty much summed up their priorities."

Rakhi#brothersisterlove And right after clicking these pictures I was pulling them apart... a fight over ladoo pretty much summed up their priorities #rakshabandhan #rakhi

Meanwhile, Tahira Kashyap finished her fourth book The 12 Commandments Of Being A Woman. Tahira wrote her first book I Promise in 2011, followed by her next novel Souled Out. She also co-authored husband Ayushmann Khurrana's biography Cracking the Code: My Journey In Bollywood. She has also has directed short films like Pinni and Toffee. The latter was screened at the 30th Cinekid International Film Festival, Amsterdam and at the 14th Bahamas International Film Festival.