"If Aao Milo Shilo Shaalo was one of the categories of Olympic Games.....Inn 2 ladkon ka medal pakka tha," wrote Aparshakti 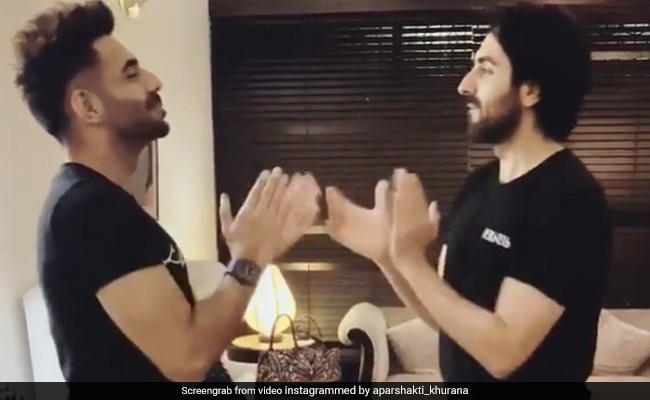 Ayushmann and Aparshakti in a still from the clip. (Image courtesy: aparshakti_khurana )

Do you still remember the classic childhood clapping game Aao Milo Shilo Shaalo? Well, Aparshakti Khurrana's latest post on Instagram featuring brother, actor Ayushmann Khurrana, will remind you of your childhood days when you used to play clapping games with your siblings and friends. Aparshakti, on Sunday, shared an ROFL video of himself and Ayushmann playing Aao Milo Shilo Shaalo or "Aam Lelo Selam Saali," as the Khurrana brothers call it. The fun-filled clip was recorded by none other than Ayushmann Khurrana's wife Tahira Kashyap. In the clip, you can also spot Ayushmann and Aparshakti's parents sitting behind them. Sharing the video, Aparshakti hilariously wrote: "If Aao Milo Shilo Shaalo was one of the categories of Olympic Games.....Inn 2 ladkon ka medal pakka tha. PS - some people called it Aao Milo Shilo Shaalo in bachpan but we have always called it Aam Lelo Selam Saali." The video is going viral on social media. Check out the trending clip here:

Ayushmann Khurrana was last seen in Gulabo Sitabo, in which he shared screen space with Amitabh Bachchan. The film, directed by Shoojit Sircar, released on Prime Video last month. Ayushmann Khurrana, who has done hits such as Vicky Donor, Shubh Mangal Zyada Saavdhan and Andhadhun, has not announced any project as of now.

Aparshakti Khurana, on the other hand, was last seen in Remo D'Souza's film Street Dancer 3D, co-starring Varun Dhawan, Shraddha Kapoor and Nora Fatehi. The actor will next be seen in Satram Ramani's film Helmet, in which he will be seen alongside actress Pranutan Bahl.