Julie 2 Movie Review: Pahlaj Nihalani is back in the good old business of peddling trash. His first is Raai Laxmi's film. 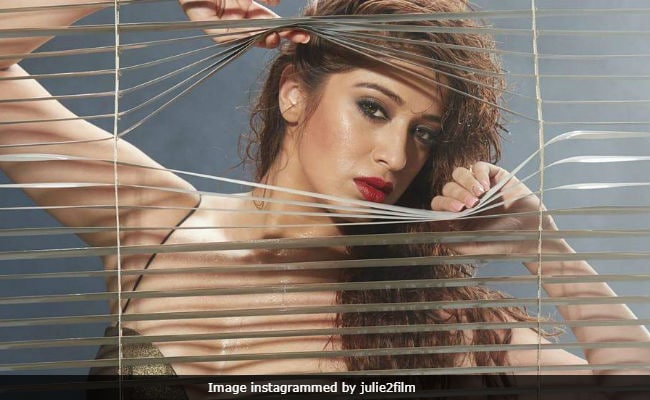 From the super-sanskari to the shabbily sensory, Pahlaj Nihalani - he of the unbendable but amusing censor board chief fame - is back in the good old business of peddling trash. Julie 2 is a whole putrid pile of it. Wade into it at your own risk. Nihalani gets the exalted credit of 'presenting' this new adult drama that is obviously targeted at fans of the kind of cinema that he once espoused in his capacity as a film producer. But are there any left? With Julie 2, written and directed by Deepak Shivdasani, Mr. Nihalani stands to lose even the handful that are. This film is neither bold nor beautiful.

Julie 2 is one too many and in more senses than one. The first Julie was bad enough. The forerunner, made way back in 2004 with Neha Dhupia doing her best to steam up the screen, should have been the beginning and the end of this project. Ill-advisedly resurrected 13 years on, the idea of a girl using her physical charms to fight exploitation in a male-dominated world has yielded this dreadfully harebrained follow-up. It is beyond the talent of southern siren Raai Laxmi, in her maiden Bollywood outing, to salvage the runaway mess. 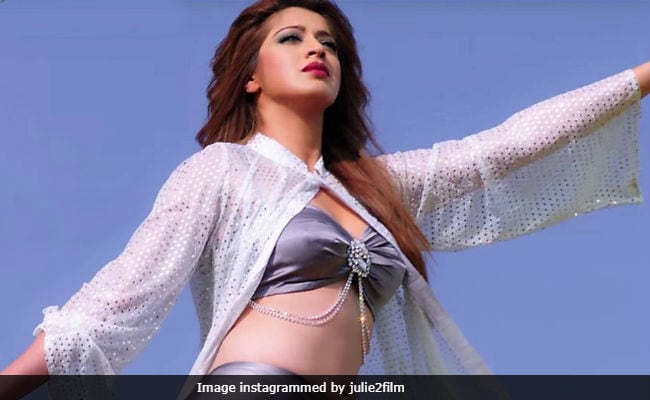 The actress never seems in total control of the enterprise. The sloppy, confused screenplay doesn't help her cause at all. Shorn of any semblance of psychological realism, the supposedly scarred character takes arbitrary, inexplicable decisions, swinging mindlessly back and forth between complete vulnerability and firm assertion, and between lust and love.

At other times, all that Raai Laxmi is needed to do is slip into slinky costumes, sway suggestively and spout stilted lines about being disillusioned with the men that she has seen and known. On the rebound, she discovers Jesus Christ and seeks solace in his benison. Let it not be said, therefore, that there is no 'sanskar' in Julie 2, even if it is of the Catholic kind.

But the overarching aim of Julie 2 is to have men eating out of the heroine's palm. Sadly, but not surprisingly, the result is exactly the opposite: she cuts a terrible sorry 'figure'. She is neither enticing nor ineluctable despite the generous skin show and the raunchy action between the sheets and elsewhere.

The writer-director throws in all that he has at his disposal, but no matter what he conjures up it does not add up to much because the film is all over the place from start to finish. Nothing it attempts works. Julie 2 is a shoddy version of The Dirty Picture in the matter of laying bare the ills of the movie industry. As a whodunit, it is a hopelessly nutty exercise that yields no real shocks and surprises. And as a tale of a woman sinned against, it is trapped in hackneyed tropes.

Julie 2 plays out like two distinct movies. The first one, which runs till the intermission, is nearly song-less if you discount the introductory item number that establishes the calling of the eponymous heroine and over which the credits roll. It is numbingly dreary and meanders through arbitrary twists that hinge on a murderous shootout in a jewellery store that leaves the female protagonist on life support and the police on the trail of an unknown conspirator.

The second part, which seeks to scale up the oomph quotient as the heroine decides to sleep her way to success, abounds in songs, one of which likens the protagonist to Chennai rasam and tandoor garam. That is as pathetic an attempt at rhyming as any you will ever come across. But it's par for the course here.

This segment of the film weaves bewilderingly concentric circles, riding on a flashback presented through the eyes of the heroine's mentor and make-up woman Annie aunty (Rati Agnihotri) as she narrates Julie's life story to assistant commissioner of police Dev Dutt (Aditya Shrivastava). It is the latter who quickly figures out that the attack on the successful actress is part of a larger conspiracy, and not just a fallout of a heist by heavily armed jewel thieves.

Through it all, it is well-nigh impossible to decipher what on earth is going on. Characters pop in and out of the story of a girl who has never known her biological father and is raped by her stepdad at age 13 before she is raised and groomed by a former actress. She runs into a string of men who, barring only one, a well-meaning film director (Nishikant Kamat), are bent upon preying on her sexually.

Promoted
Listen to the latest songs, only on JioSaavn.com
These manipulators include a southern superstar Ravi Kumar (Ravi Kishen), a celebrity cricketer Vikram (Sahil Salathia) and a Dubai-based underworld don Atif Lala (Dev Gill). She also has to contend with sundry predatory producers. One offers to take her on a trip to London; another wants to unseal her like a bottle of whiskey. 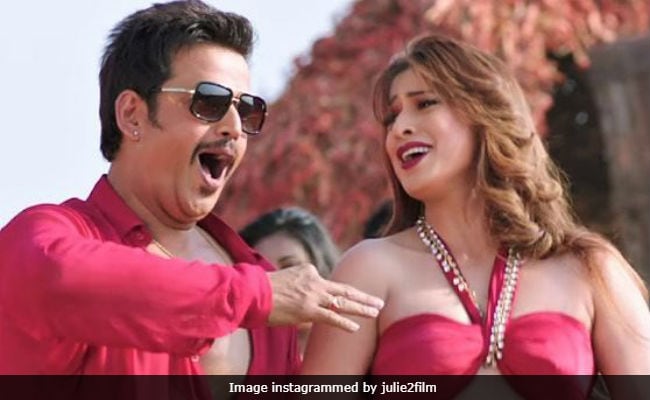 However, the principal villain of the film is a deceased politician's husband, Ashwini Asthana (Pankaj Tripathi), who hires Julie to play his late wife on the big screen in a biopic titled Devi. This film-within-the-film is directed by a Frenchman called Jean Claude and aimed at international festivals. Talk of dreaming big!

The question isn't whether Julie 2 has any potential of making waves anywhere at all. The most mystifying aspect of this film is the presence of Pankaj Tripathi. What is he doing here? That question would be directed at anyone who ventures anywhere near a screen playing Julie 2. Stay away.