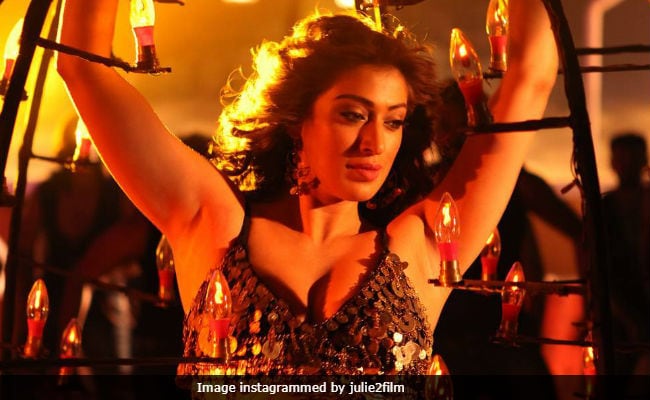 New Delhi: Julie 2, starring South actress Raai Laxmi and presented by Pahlaj Nihalani, opened to poor reviews and box office collection on Friday. As per a Box Office India report, the film's total collection on the first day was Rs 50 lakh, way less than last week's release Tumahari Sulu. Trade analyst Taran Adarsh disclosed that Vidya Balan's film started its second week's collection at Rs 1.25 crore and added that the business is expected to take grow over the weekend. Julie 2 released along with Hollywood films Murder On The Orient Express and Coco, which too did not perform very well.

Julie 2 is Pahlaj Nihalani's first film as presenter after his stint as the boss of the Central Board of Film Certification. In his review for NDTV, Saibal Chatterjee said: "Pahlaj Nihalani is back in the good old business of peddling trash. Julie 2 is a whole putrid pile of it."

Promoted
Listen to the latest songs, only on JioSaavn.com
He added: "Mr Nihalani gets the exalted credit of 'presenting' this new adult drama that is obviously targeted at fans of the kind of cinema that he once espoused in his capacity as a film producer. But are there any left? With Julie 2, written and directed by Deepak Shivdasani, Mr. Nihalani stands to lose even the handful that are. This film is neither bold nor beautiful." Saibal Chatterjee gave the film 1-star rating.

Pahlaj Nihalani said that Julie 2 is inspired by the life of a popular actress from the Nineties, which many assumed was Nagma, who in turn told Deccan Chronicle that she has no idea about it.