John Abraham Is "Smiling" In This Post-Workout Pic. Look Carefully 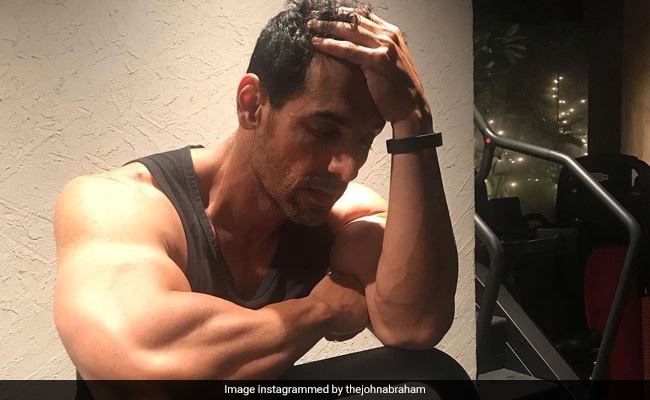 Actor John Abraham summed up his post-workout feeling in his latest post on Instagram. The actor, who often shares pictures of himself sweating it out in gyms, added one more photo to his fitness diaries but this time, accompanied it with an epic caption. In the picture, the 47-year-old actor looks quite exhausted after his workout session. However, in the caption, he wrote that he is "smiling" in the picture. Can't spot it? Well, it's because he is "smiling inside" in the photo. The caption on John Abraham's post read: "I'm smiling inside. #postworkout #goodpain." John Abraham's fit physique, once again, left his fans in awe. They dropped fire icons in the comments section.

Recently, black and white pictures of John Abraham from a gym trending for a couple of days on social media. "No rest for the weary. #riseandgrind #beastmode #gym," he captioned the pictures.

In terms of work, John Abraham is known for his performances in films like Dhoom, Water, Taxi No 9211, Dostana, New York, Housefull 2, Shootout at Wadala, Madras Cafe, Parmanu, Satyameva Jayate and Batla House.

He will next be seen in Satyameva Jayate 2. The film, directed by Milap Zaveri and co-produced by Bhushan Kumar, Krishan Kumar, Monisha Advani, Madhu Bhojwani and Nikkhil Advani, was initially slated to open in theatres on Gandhi Jayanti i.e October 2 but got postponed due to the pandemic.