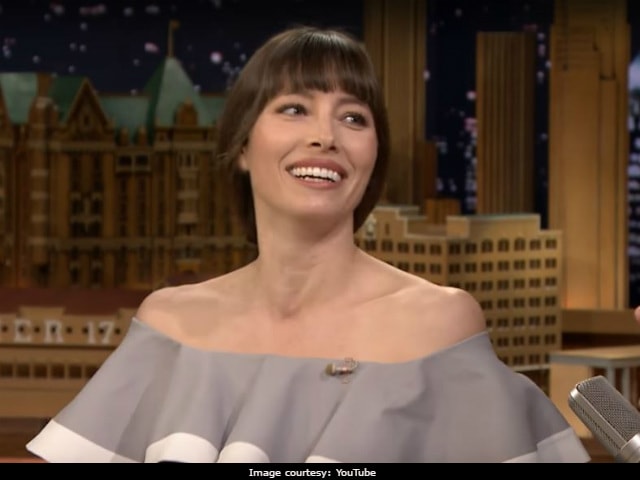 New Delhi: Actress Jessica Biel recently opened up about being a parent and said that the only time she gets to eat in the morning is while taking a shower. The 34-year-old actress was speaking on Jimmy Fallon's show, where she also unveiled the trailer of her new TV series The Sinner. Jimmy Fallon referred to a photograph shared by Jessica and captioned "Shower Eats," when the Powder Blue actress said "You should try. Sometimes it's a huge success, sometimes it's a huge failure." The picture, Instagrammed by Jessica some five months ago, shows an empty plate and a cuppa kept on the shower basin. Jessica Biel married singer Justin Timberlake in 2012 and they are parents to one-year-old son Silas Randall Timberlake.

"This is just mom life. I don't know if anybody else does this but I do not have time for anything. Feeding him in the morning and trying to get ready, I realise I haven't eaten and then I take it into the shower. You should try. Sometimes it's a huge success, sometimes it's a huge failure," Jessica said on Jimmy Fallon's show.

This is the picture Jessica and Jimmy Fallon referred to:

Yes. I eat in the shower. I admit it. Chicken apple sausage and espresso. Try it. I dare you. #ShowerEats

As show host tried to figure out the tactics of having a successful brekkie in the shower, they also discussed food options best suited for eating in while taking a bath. "Sausage works great," said the actress.


Meanwhile, Jessica also opened up about playing the protagonist on crime thriller The Sinner and said: "It's really just about this very normal woman, who has a family and commits a very public act of violence which is shocking. And she doesn't know why." Jessica Biel's first look and the trailer of The Sinner will indeed give you goose bumps.

Don't worry it's not mine. Wait. That makes it weirder right?? Check out the exclusive trailer of my new show, #TheSinner, on @fallontonight. (@entertainmentweekly)

Promoted
Listen to the latest songs, only on JioSaavn.com
Video: Watch the trailer of The Sinner:


The Sinner also stars Bill Pullman and Christopher Abbott and is directed by Antonio Campos. Jessica Biel's crime series is based on Petra Hammesfahr's book titled The Sinner and marks her return to television after 2014's New Girl. The Sinner will reportedly air hour-long episodes and is scheduled to release this year.