The couple were reportedly joined by their family and close friends such as Emma Stone, Kris Jenner and Sienna Miller at the wedding 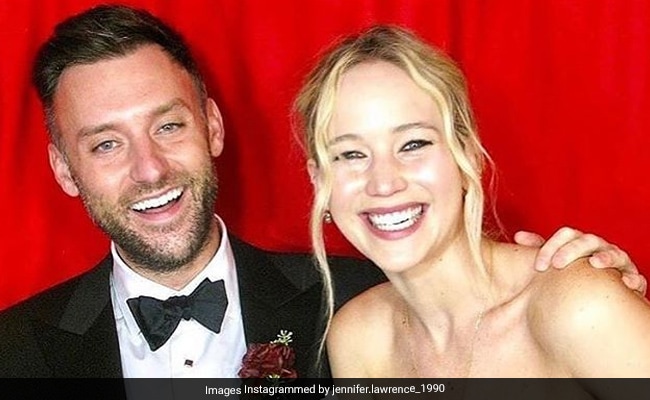 Actress Jennifer Lawrence reportedly married her art gallery director beau Cooke Maroney in a private ceremony in Rhode Island on Saturday. As per a People report, the Red Sparrow actress, 29, and Cooke Maroney, 34, exchanged vows in Belcourt of Newport, a luxurious mansion owned by Alex and Ani CEO Carolyn Rafaelian. The publication also reported that Jennifer Lawrence wore a beautiful Dior gown for her wedding, which was attended by around 150 guests. The couple were joined by their family and close friends such as Emma Stone, Kris Jenner and Sienna Miller at the wedding in Rhode Island, stated the People report.

People also reported that Jennifer Lawrence's director friend David O. Russell, Adele, Ashley Olsen, Amy Schumer and Cameron Diaz were among the other guests who attended the wedding, which was followed by a reception.

Jennifer Lawrence reportedly got engaged to Cooke Maroney, who is the director of Gladstone 64 art gallery on Manhattan's Upper East Side, in February this year, stated People in its report. Earlier this year, on a podcast show NAKED With Catt Sadler, Jennifer had called Cooke Maroney "the greatest human being" she's ever met and said: "I just met Cooke and I wanted to marry him. We wanted to marry each other. We wanted to commit fully and you know, he's my best friend. I feel very honored to become a Maroney."

On the work front, Jennifer Lawrence has featured in hits such as X-Men: Days of Future Past, Joy, American Hustle, Winter Bone's, Red Sparrow, the Hunger Games series of films and Silver Linings Playbook, for which she won the Best Actress Oscar.