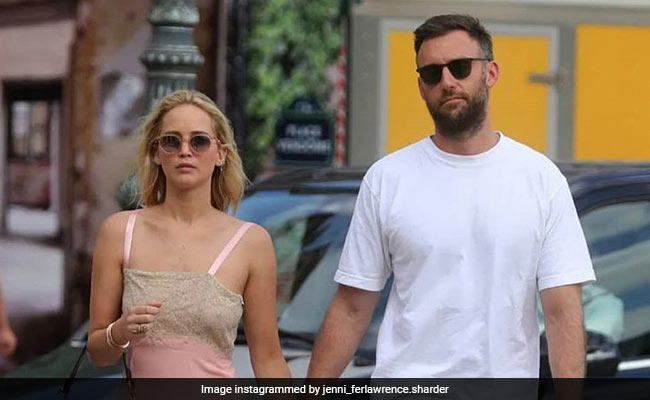 Monday blues? What Monday blues? Did Jennifer Lawrence and Cooke Maroney secretly get married in New York on Monday? As per a Page Six report, the Silver Linings Playbook actress and her art gallery director beau were spotted outside New York City Marriage Bureau in City Hall on Monday and the couple were not alone. They were reportedly spotted with two security guards, a common friend and celebrity photographer Mark Seliger, known for his portraiture, stated the Page Six report. As per the publication, speculation was sparked after photos of the couple hand-in-hand with Jennifer Lawrence clutching onto a paper made their way to social media. Jennifer Lawrence and Cooke Maroney reportedly began dating some time last year.

Page Six also reported that a certain Twitter user spotted the couple outside NYC Marriage Bureau and put out this excited tweet, which is, however, now deleted: "When you go get your marriage license and Jennifer Lawrence walks by to tie the knot before your eyes. Yeah, kids, City Hall is COOL. The place to go!" Page Six also reported that J-Law was spotted in a grey blazer casually thrown over denims while Cooke Maroney walked along with her in white sweatshirt and pants.

Jennifer Lawrence, who maintains a strict policy about her personal life, reportedly got engaged to Cooke Maroney, who is the director of Gladstone 64 art gallery on Manhattan's Upper East Side, in February this year when Page Six had reported that the couple were spotted celebrating their big day at a French Bistro named Raoul's while a "giant rock" was spotted on the actress' ring finger.

While Jennifer Lawrence hasn't confirmed a date for the wedding ceremony yet, she has already had a "last minute" bachelorette on podcast show NAKED With Catt Sadler, on which, J-Law also said: ""I just met Cooke and I wanted to marry him. We wanted to marry each other. We wanted to commit fully and you know, he's my best friend. I feel very honored to become a Maroney."

Jennifer Lawrence is best known for critically acclaimed films such as Joy, American Hustle, Winter Bone's, the Hunger Games series of films and Silver Linings Playbook, for which she won the Best Actress Oscar.