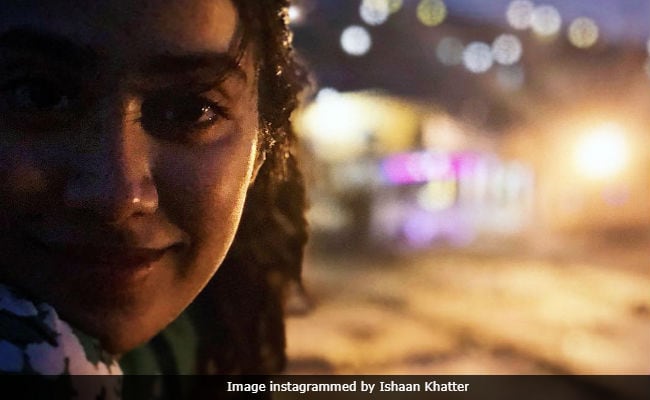 New Delhi: The first picture of 2018 shared by Ishaan Khatter on Instagram is that of his Dhadak co-star Janhvi Kapoor. "Catch the magic in 2018," he captioned it. 'The magic' Ishaan's talking about is supposedly their film Dhadak, which marks their debut ion Bollywood - although, Ishaan has already featured in Iranian director Majid Majidi's Beyond The Cloud. Ishaan and Janhvi were filming Dhadak in parts of Rajasthan for most of December. They returned to Mumbai in time to catch the screening of Salman Khan's Tiger Zinda Hai. Ishaan and Janhvi often hand out together and this gorgeous picture of Sridevi's daughter must have been taken during one such outing.

Dhadak is directed by Shashank Khaitan, who also made Humpty Sharma Ki Dulhania and Badrinath Ki Dulhania with Varun Dhawan and Alia Bhatt. Dhadak is a remake of Marathi blockbuster Sairat and the project has been financed by Karan Johar through Dharma Productions. "Janhvi and Ishaan are great people and are very hardworking. These are the two things that I always look for in actors," Shashank told news agency PTI.

Sairat, which released in April 2016, is the story of two young lovers who belong to different castes and how they overcome the societal barriers to be together. Shashank Khaitan told PTI that the premise of Dhadak and Sairat is the same but they belong to different settings. "My story is based on another set up... It is (set) in Rajasthan. It comes with its own challenges, conflicts and style of a love story," he said.

Dhadak is expected to hit the screens on July 6.