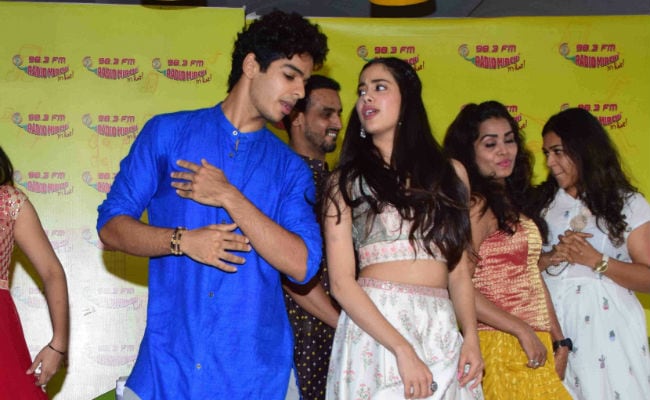 Ishaan Khatter and Janhvi Kapoor at the launch of Zingaat

The lead stars Dhadak, Janhvi Kapoor and Ishaan Khatter are gearing up for the release of the film. Dhadak is the official remake of the Marathi blockbuster Sairat, which released in 2016. Describing the Hindi remake as "unique," Ishaan hopes that the audience can connect to the efforts put in by the cast while making the film. "I really hope when audience watch the film, they realize that it is a sincere adaptation and it's a unique film in its own way. We have been really honest while making this film and we have sacrificed our blood, sweat and tears while making it. So, I hope our efforts will connect with the audience," IANS quoted the actor saying. Ishaan said: "I am feeling really happy to launch this song as it comes at very important juncture of the story in the film and to get an opportunity to dance on this song was really amazing experience," IANS quoted Ishaan Khatter saying.

Since the release of the official trailer, Dhadak has been constantly compared to Sairat. Though many praised the trailer and the two leads, others found it to be lagging behind when compared to Sairat. "Comparisons are bound to happen with Sairat because our film is official adaptation of that film," Ishaan Khatter told IANS. "I think Akash Thosar and Riku Rajguru did amazing job in Sairat. As far as comparison between both Zingaat song is concerned, I think this song has a universal appeal... People from any part of the country enjoy this song when it plays," the actor added.

Sairat released Zingaat in 2016, the song became an instant favourite. Such was the popularity of the song that Dhadak also features the track, which was launched by its lead stars on Tuesday. Speaking about Zingaat, Ishaan said he is absolutely in love with the song and that it plays a very significant part in the film, IANS reported. "I am a huge fan of this song especially, the way Amitabh Bhattacharya has written the lyrics of this song. I hope audience will have same amount of fun while watching this song as much as we had while shooting it," Ishaan added.

Promoted
Listen to the latest songs, only on JioSaavn.com
Directed by Shashank Khaitan, Dhadak has been produced by Karan Johar's Dharma Productions. The film hits screens on July 20.