You 'May' Have Missed Janhvi Kapoor's Month Album, So Here's A Look 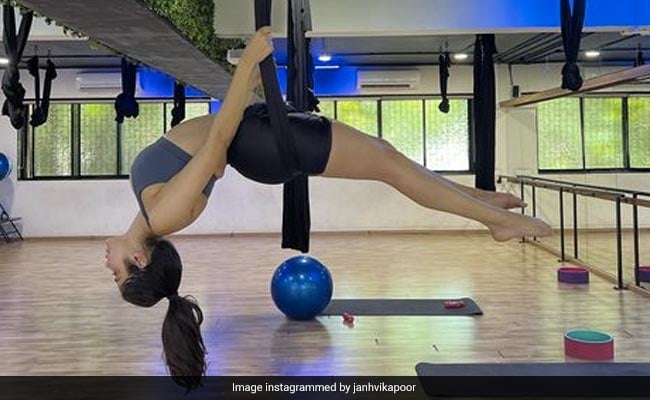 Janhvi Kapoor is a social media darling and one look at her Instagram profile will tell you why. The young star is loved for always keeping it real and being her charming self on Instagram, where she often drops pictures of her professional and personal life. Now, as we near the end of May, the Dhadak actress has shared a carousel of pictures looking back at the month and the results are interesting, to say the least. At a first glance, the set of pictures is a wonderful combination of glamorous and joyful moments and follows her through her fitness lessons, photoshoots and even a quick pizza break.

In the first image, Janhvi Kapoor is seen pulling off a complex yoga pose. She then follows this with several images from a glam shoot as well as costume fittings. The post ends with an image of a tired Janhvi resting in her vanity van as her team gets her ready for the day ahead. In the caption, Janhvi Kapoor wrote, “May so far.”

A week ago, Janhvi Kapoor shared a set of behind-the-scenes pictures from a photoshoot – glimpses of which we even see in the latest post. Sharing a bunch of images in which Janhvi is getting her hair, makeup and fittings done with the help of her team, she wrote, “It takes an army and I have the best, hehe.”

Before that, Janhvi Kapoor shared another set of similar pictures from her vanity van. In the photos, she is seen working and having fun with her hair and makeup team. In the caption, the actress just dropped a heart emoji.

Janhvi Kapoor also left fans in awe of her grace when she recently shared a video of her dancing at home to the famous Umrao Jaan track In Aankhon Ki Masti. The video, she wrote, was recorded two years ago. In the caption, Janhvi said, “Throwback to 2 years ago, one of my first baithaki bhaav attempts. Miss it.”

On the work front, Janhvi Kapoor was last seen in the 2021 film Roohi. She will be seen in a bunch of upcoming films including Good Luck Jerry, Mili, Mr And Mrs Mahi and Bawaal.