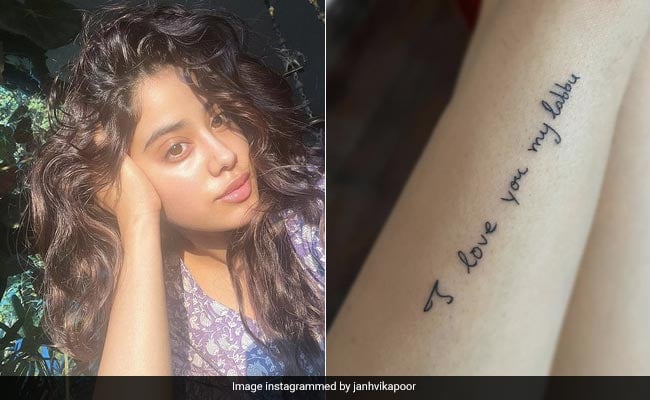 Janhvi Kapoor, on Thursday, shared scenes from her "days well spent" and one of them caught out attention. It is a tattoo of a handwritten note by her late mom and actress Sridevi on her arm. The note was written by Sridevi for Janhvi Kapoor and it read: "I love you my labbu. You are the best baby in the world." The note was previously shared by the Gunjan Saxena actress on her Instagram profile and now, she got a part of it - "I love you my labbu" - inked on her forearm. She also shared a video of herself getting the tattoo.

The other photos and video from Janhvi Kapoor's latest post are from her visits to temples and outings at hilly stations.

Janhvi Kapoor shared the photo of the aforementioned note on Sridevi's death anniversary in February this year. Sridevi died on February 24, 2018, in Dubai, where she was attending a family wedding. She was 54. Sridevi and filmmaker Boney Kapoor welcomed Janhvi on March 6 in 1997. Their second daughter Khushi Kapoor was born in November 2000.

Janhvi Kapoor entered the entertainment industry with Shashank Khaitan's 2018 film Dhadak, a Hindi remake of Marathi hit Sairat. She co-starred with Ishaan Khatter in the film. Her next project was Netflix's anthology Ghost Stories, where she featured the Zoya Akhtar-directed segment. The actress went on to star in Dharma Productions' Gunjan Saxena: The Kargil Girl, which also starred Pankaj Tripathi and Angad Bedi.

Shahid Kapoor: "After Kabir Singh Released, I Went Like A Beggar To Everybody"