The first song of Ranbir Kapoor and Katrina Kaif's much-awaited film Jagga Jasoos, titled Ullu Ka Pattha, was unveiled by the makers of the film on Friday 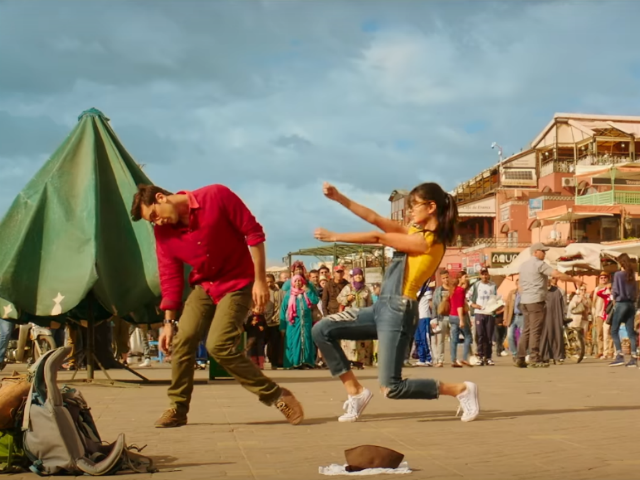 Jagga Jasoos: A still from the song Ullu Ka Pattha

New Delhi: The first song of Ranbir Kapoor and Katrina Kaif's much-awaited film Jagga Jasoos was unveiled by the makers of the film on Friday. The song, titled Ullu Ka Pattha, has Ranbir and Katrina dancing on the streets of Morocco, showing off their quirky and robotic dance moves in order to collect money for their travels. The chemistry of the former couple in the two-and-a-half minute song is absolutely adorable. Ullu Ka Pattha has been sung by Arijit Singh & Nikita Gandhi. The lovely music of the song has been composed by Pritam and the lyrics have been written by Amitabh Bhattacharya.


Jagga Jasoos, directed by Anurag Basu, also stars Adah Sharma in the lead role. The film is scheduled to release in theatres on July 14, two days before Katrina Kaif's birthday. Last week, the actress shared a new poster of the film on social media announcing the same.

It's official ... new release date July 14th ! 2 days before my birthday , sorry had to get that in #JaggaJasoos @utvfilms @anuragsbasu @disneyindia

Ranbir Kapoor will be making his debut as a producer with Jagga Jasoos. The film marks the 34-year-old actor's second collaboration with Anurag Basu. The duo has previously worked together in 2012 movie Barfi!.

Promoted
Listen to the latest songs, only on JioSaavn.com
The first trailer of Jagga Jasoos was unveiled by the makers of the film in December last year. Ranbir Kapoor will be seen playing the role of a detective in the film, who is in search of missing father.