"Overjoyed to formally announce that Sajid Nadiadwala locked the script at 4 am this morning and has written an exceptional role for you," wrote Sajid's wife Warda 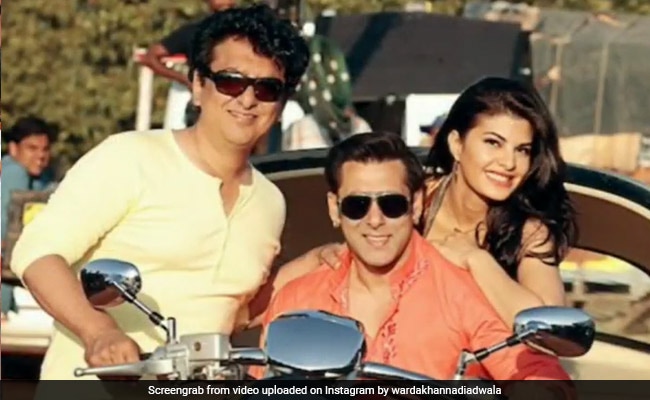 It's official guys! Jacqueline Fernandez will star alongside Salman Khan in the sequel to their 2014 blockbuster Kick. Filmmaker Sajid Nadiadwala, who directed and produced the first part, announced the sequel as a birthday gift for the actress, who turned 35 on Tuesday. The good news was shared by Sajid's wife Warda on social media. Posting a video comprising pictures of Salman, Jacqueline and Sajid from the sets of their 2014 film along with short clips of the actress' dance sequence from the film, Warda Nadiadwala wrote that Sajid "locked the script" of the sequel earlier on Tuesday and he has written an "exceptional role" for Jacqueline.

"Here's your birthday gift that will be remembered forever! Jacqueline Fernandez, overjoyed to formally announce that Sajid Nadiadwala locked the script at 4 am this morning and has written an exceptional role for you! Whoo-hooo! Happy birthday! Salman Khan's Kick 2 rolling soon! Welcome back!" wrote Warda.

Jacqueline Fernandez played Salman Khan's love interest in Kick, which also starred Randeep Hooda, Nawazuddin Siddiqui, Mithun Chakraborty and Archana Puran Singh. To wish her co-star on her birthday, Salman Khan shared a happy photo of themselves and wrote: "Happy birthday Jacky...Wish you all the happiness." Jacqueline, who was living with Salman Khan at his Panvel farmhouse during the nationwide lockdown, also co-starred with him in Race 3.

Jacqueline Fernandez was in talks for the spot of the lead actress in Kick 2 from the starting. However, a Bollywood Hungama report earlier stated that the makers were also considering Kriti Sanon and Pooja Hegde for the lead role. The report also stated that the film will release on Eid in 2021. "As we all know, Ramzan Eid is now synonymous with Salman Khan releases. So what better than this holy festival to bring Kick 2? Even part 1 had released on Eid in 2014. Hence, Kick 2 will hit theatres in May 2021. Since Eid falls on May 13 in 2021, Kick 2 might also arrive the same day and thus have the advantage of a four-day weekend," a source was quoted as saying by Bollywood Hungama.

The full cast of Kick 2 has not been revealed yet. The makers are yet to announce the official release date.

About Kick, it was the Hindi remake of the Telugu film of the same name.