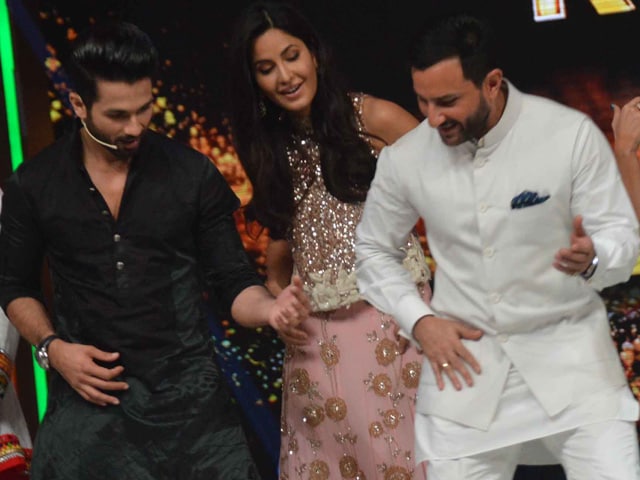 Shahid, Katrina and Saif photographed on the sets of Jhalak Dikhhla Jaa.

New Delhi: Actors Shahid Kapoor and Saif Ali Khan spent an evening at close quarters on the sets of talent show Jhalak Dikhhla Jaa on Wednesday. For those who don't know, Saif is actress Kareena Kapoor's husband and Shahid her ex-boyfriend.

Saif and actress Katrina Kaif, also in the picture, were on Jhalak promoting their new film Phantom, releasing later this month.

Shahid is judging the new season of the reality show, having taken over from Madhuri Dixit.

A selfie wasn't the only photo that emerged from the Jhalak evening - Shahid and Saif also danced together on the show, Katrina bringing up the rear.

Shahid and Kareena dated for a while and starred in several films together including 36, China Town and the hit Jab We Met. In 2008, Saif and Kareena fell in love on the sets of Tashan. They married in 2012.

Meanwhile, Shahid, now married to Delhi girl Mira Rajput, and Saif will star in Vishal Bhardwaj's next film together and will presumably spend many more moments up close and personal with each other.