Sidharth Malhotra shared the first poster of Aiyaary and announced the release date as January 26, the same as Akshay Kumar's PadMan 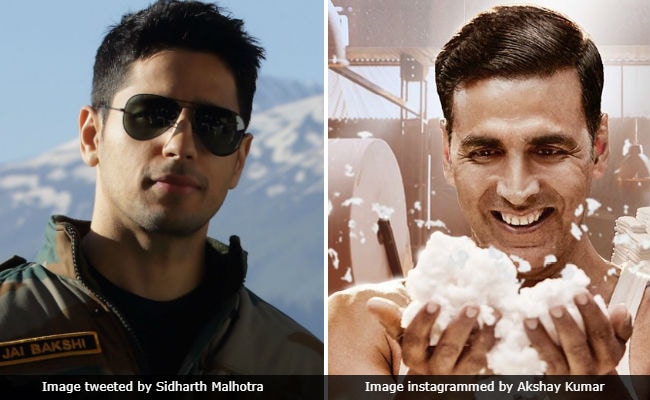 Sidharth Malhotrain Aiyaary and Akshay Kumar in PadMan. (Images by Sidharth and Akshay)

New Delhi: Sidharth Malhotra's Aiyaary is all set to clash with Akshay Kumar's PadMan on Republic Day. Sidharth and team Aiyaary shared the first poster of their film announcing the release date as January 26, which was confirmed as the release date of PadMan a few weeks ago. The Brothers co-stars will now compete for a better collection at the ticket window soon. The trailer of PadMan released to phenomenal response on Friday. Aiyaary and PadMan are absolutely different in terms of content and plot. Aiyaary is a patriotic film while PadMan is a dramedy inspired from the life of Arunachalam Muruganantham.

Here's the first poster of Aiyaary:

#AiyaaryPoster is out now! This one is for all those who serve our nation selflessly. #Aiyaary in cinemas
this #RepublicDay#VijayDiwas@neerajpofficial@BajpayeeManoj@Rakulpreetpic.twitter.com/UTYmHDYBOQ

Watch the trailer of PadMan:

On Friday, the makers of Aiyaary pranked social media with a promotional gimmick by sending the film's lead actor off Twitter with the message: "Sorry, I am done!" Sidharth's Aiyaary co-stars Rakul Preet Singh and Pooja Chopra also responded to his tweet asking if things were okay with the trending hashtag #SidsOffTheGrid. Twitter slammed the makers' promotional tactic as a "cringe-worthy marketing" piece.

Marketing strategy, isn't it? If yes then definitely you guys can do better than this! Disgusting marketing tactics. #SidsOffTheGridpic.twitter.com/FxcBGNuuPY

On Saturday, Sidharth (aka Major Jai Bakshi on Twitter) returned to the platform when commanded by Colonel Abhay Singh (Manoj Bajpayee's character in Aiyaary).

Major jai bakshi!!as your commanding officer i order you to come bak.@S1dharthM#Aiyaary

Haha who said I'm off the grid? my #Aiyaary may have troubled some but I'm grateful for your support... big love

This kinda dangerous aiyaary isnt useful and u hurted us..i am sorry i am nt gonna support this trick

Back to Aiyaary vs PadMan:

Aiyaary is a crime drama directed by Neeraj Pandey, who has made films like Baby and Special 26 with Akshay Kumar. Meanwhile, Akshay's PadMan is produced by Twinkle Khanna and it is directed by R Balki. The film also features Sonam Kapoor and Radhika Apte in pivotal roles.
Comments
akshay padmansidharth aiyaaryaiyaary vs padman