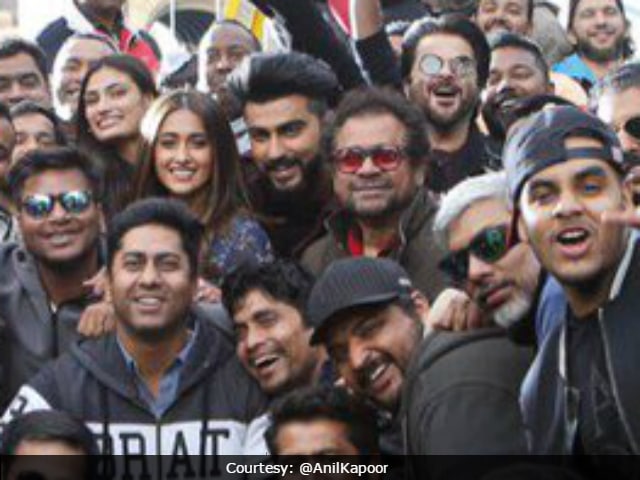 New Delhi: The shooting of Anil Kapoor's upcoming movie Mubarakan has been wrapped. Directed by Anees Bazmee, Mubarakan is starring Anil Kapoor first time opposite his nephew Arjun Kapoor. Mubarkan, which is releasing on July 28, also stars Ileana D'Cruz and Athiya Shetty. Anil Kapoor shared a group picture on social media where he can be seen giving a shout out for Mubarakanwith his co-stars on the last day of shoot. He wrote: "It's a wrap! Saying goodbye to the Mubarakan family & this gorgeous city is like saying goodbye to family & home." The same picture was shared by Arjun, Ileana and Athiya with different 'goodbye' messages.

Arjun wrote: "Can't believe it's over! What a journey what an experience! Unforgettable!" along with the group picture shared on Twitter. Ileana rather shared the picture on Instagram and captioned it: "Can't believe another film is over! This was one crazy mad laughter-filled ride n I can't wait." "Cannot believe it's over! A set filled with nothing but love and laugher, with people who just want to see you grow! Thank you," Athiya wrote on Twitter.

Can't believe it's over !!! What a journey what an experience !!! Unforgettable !!! pic.twitter.com/UUlN3Ziglr

Can't believe another film is over!! This was one crazy mad laughter-filled ride n I can't wait to share this journey with u all! 28th July!! Thank u to my whole crazy talented cast n crew! U made Mubarakan that much more special! #mubarakan

Cannot believe it's over! A set filled with nothing but love and laugher, with people who just want to see you grow! Thank you #Mubarakan

The Mubarakan star cast was very much regular updating fans and followers throughout the shooting. Also before the wrap, Anil Kapoor, Arjun, Ileana and Athiya held a press conference along with the director. The movie, wherein Anil Kapoor will be seen sporting a turban for the first time in the film career, had a 50-day shoot schedule in London. Arjun has a double role in Mubarakan, while Anil Kapoor essays his uncle Kartar Singh. Athiya Shetty will be seen in the role of a simple Punjabi girl in the movie.

"This is how we do it"! The madness and the craziness begins! Celebrations & happy faces all around! @MuradKhetani@SnehaRajani@ashwinvardepic.twitter.com/rW7kEueyQJ

Poora London thumakda on my beat !!! Got the tourists & the locals on #trafalgarsquare to be part of #Mubarakan !!! Btw spot me if u can !!! pic.twitter.com/bTUrHTsZOc

"But you know, happiness can be found even in the darkest of times, if one only remembers to turn on the light."
- J.K. Rowling #Mubarakanpic.twitter.com/mYrftPjykv

Before the release of Mubarakan, Arjun Kapoor will be seen in Mohit Suri's upcoming movie Half Girlfriend, also starring Shraddha Kapoor. Half Girlfriend is releasing on May 19.