"So much fun... Miss those old times," wrote Shilpa Shetty 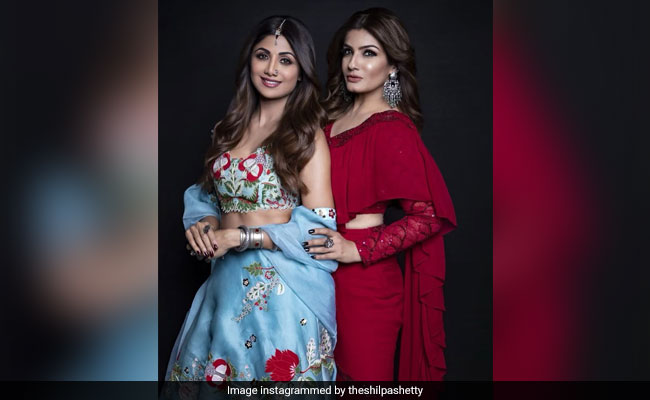 Bollywood stars frequently make appearances on the dance reality show Super Dancer Chapter 3 and the latest addition to the list is Raveena Tandon. Shilpa Shetty, who is one of the judges on the TV show, shared a picture of herself along with Ranveena on her Instagram profile. Shilpa and Raveena were contemporaries the Nineties and they have worked together in the 2000 film Jung, co-starring Sanjay Dutt and in the 1998 film Pardesi Babu, starring Govinda. Shilpa shared a picture with the Mohra actress and we must tell you that both the actresses looks absolutely stunning in traditional outfits. Raveena too shared the image from the sets of the show on her Instagram profile.

Shilpa Shetty captioned the post: "Was so good having my friend Raveena Tandon as our guest judge on the Super Dancer Chapter 3 panel today. So much fun.. Miss those old times." Shilpa borrowed a line from Raveena's super hit song Tu Cheez Badi Hai Mast Mast from her film Mohra and added, "Can I be cheesy and say, Swasth raho Masssst Masssssst Raho. Tu ab bhi bahut mast hai."

Meanwhile, Raveena Tandon shared a video on her Instagram profile, wherein she and Shilpa could be seen twirling their dupattas. "Fun time always when working with friends," read the caption on Raveena Tandon's post.