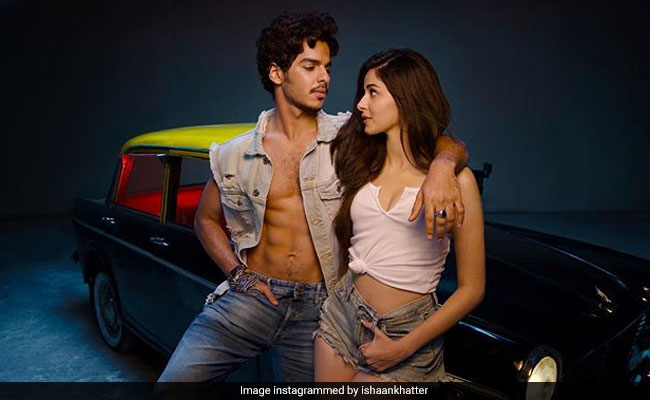 Ishaan Khatter goes on to describe Ananya Panday as "atrangi", referring to her interesting captions on Instagram. The Suitable Boy recently made his debut on Neha Dhupia's talk show No Filter Neha, a teaser of which has been shared by the show host on her Instagram. Host Neha Dhupia digs out interesting tales of celebrities on her show and she did something similar with Ishaan Khatter. While playing the game of guessing 'Who's Instagram caption it is', Ishaan aced it by prompting Ananya's name when this caption was read out: "I think I'm in a love triangle." Neha Dhupia wasn't even done reading out the entire caption and Ishaan got it right. Looks like Ishaan has been keeping track of social media posts of her co-star Ananya. Ishaan goes on to say, "Vo badi atrangi hai. Bhot sochti hai vo captions ke bare mein."

Neha Dhupia recently posted this video of her interview with Ishaan Khatter on Instagram:

Be it dancing or acting, this actor has already started tracing his brother's footsteps. Only two films old, his career graph is only going to go above and beyond the clouds! Please welcome the shaan of Bollywood, @ishaankhatter ! Listen up now to our finale episode of #nofilternehaseason4 only on @jiosaavn co produced by @wearebiggirl ... link in bio

Check out Ananya Panday's post with her "atrangi" caption, which reads: "I think I'm in a love triangle. I love myself, myself loves me, me loves I."

I think I'm in a love triangle... i love myself, myself loves me, me loves i

The audio version of the complete episode, which is also the season finale, is available on JioSaavn, on which Ishaan made certain revelations. Ishan Khatter opened up about his relationship status as being single but shyly accepted that he is in a bromance relationship with Gully Boy actor Siddhant Chaturvedi. He adores MC Sher so much so that they he claims they are in their "honeymoon period": "We are in the honeymoon period of our relationship right now" when questioned, "What would you like to change about him?"

Ishaan Khatter made his acting debut in a full-fledged role in the film Beyond The Clouds and Ananya Panday's debut film was Student Of The Year 2. The two actors will be sharing screen space for the first time in the movie Khaali Peeli, which is releasing on June 12, 2020. Ananya and Ishaan will be featuring as a romantic couple in the film.