Is Kajol The Villain Of VIP 2? Here's The Answer 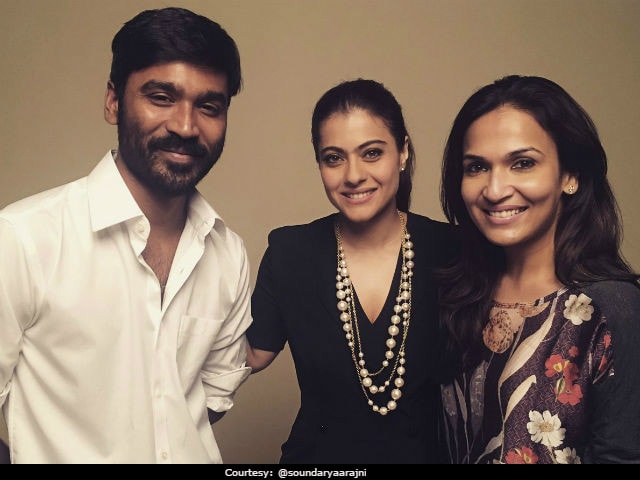 Kajol and Dhanush are co-stars of VIP 2 (courtesy: soundaryaarajni)

New Delhi: Details of actress Kajol's role in work-in-progress Tamil film VIP 2 have been revealed by news agency IANS, which reports that the 42-year-old star will play a businesswoman who tangles with lead actor Dhanush but isn't necessarily the villain of the piece. Velaiilla Pattadhari 2, abbreviated into VIP 2, is a family affair of sorts with Rajinikanth's daughter Soundarya directing her brother-in-law Dhanush, who also co-produces. A source from the film told IANS, "She (Kajol) plays a suave businesswoman, and there will be different shades to her character. She has already joined the sets and has already shot for a week."

About rumours that Kajol has been cast as the villain, the source told IANS: "Her character is such that she will lock horns with Dhanush, but that doesn't qualify to make her the antagonist. Audiences are in for a surprise when they watch the film."

Kajol posted this from the sets some days ago:

All work an mayb a lil play ;) pic.twitter.com/er5Xnu7qeH

VIP 2 is a sequel to 2014's Velaiilla Pattadhari, from which Dhanush and Amala Paul reprise their roles. Kajol is a new addition to the cast, which also includes Saranya Ponvannan, Samuthirakani and Vivek. It's been 20 years since the actress made a Tamil film. She last starred in 1997's Minsara Kanavu, released in Hindi as Sapnay, with Arvind Swamy and Prabhu Deva. Kajol told PTI earlier, "I am a little apprehensive but I love the fact that I am going back to Tamil cinema."

VIP 2 began filming last month after Rajinikanth presided over a puja in Chennai. Kajol did not attend but Dhanush, Amala, Soundarya and others did. 'God Bless,' wrote Rajinikanth on Twitter. Soundarya provided pictures:

Earlier this month, Dhanush tweeted a motion poster of himself and Kajol.

A release date for VIP 2 hasn't been announced yet but the film is slated for some time this year.

Promoted
Listen to the latest songs, only on JioSaavn.com
Kajol was last seen in 2015's Dilwale. Dhanush appeared in Kodi and Thodari last year. He is currently also filming two other movies - Enai Noki Paayum Thota and Vada Chennai - and directing a third, Power Paandi.