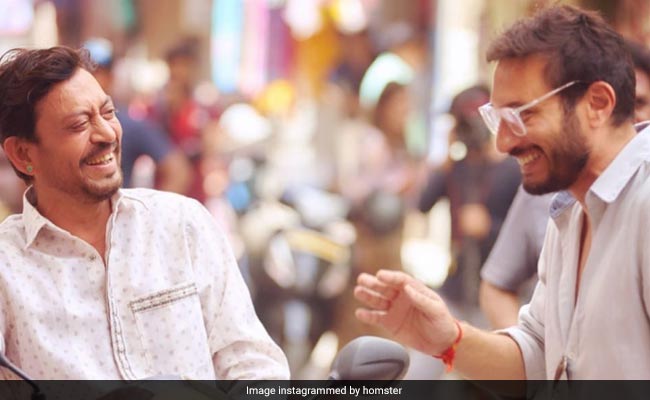 Irrfan Khan and Homi Adajania on the sets of Angrezi Medium.(Image courtesy: homster)

According to Angrezi Medium director Homi Adajania, Irrfan Khan's laughter makes "life better" and we couldn't agreed more. The reason we brought this up today is because the filmmaker shared a picture of himself along with the film's lead actor Irrfan Khan, who can be seen laughing with all his heart in the picture. In his post, Homi revealed the reason behind Irrfan's bright smile and wrote: "Life is better when you're laughing.... Actually I'm just cracking a really f@#k all joke and Irrfan is a really fab actor. Laughing till your belly hurts every day." Homi Adajania added the hashtags "#shootlife, #angrezimedium" and "#champakmithaiwala" to the post.

Irrfan Khan, who will be seen playing the role of a shopkeeper in Angrezi Medium, shared a picture of himself from the sets of the film and wrote: "GMB serving since 1900s. It's going to be fun to tell another story. Angrezi Medium coming soon, with Mr Champakji...Aa raha hu phir entertain karne sabko. It's time to know Champak Ji."

Angrezi Medium went on floors a few weeks ago. A picture of film's lead actor Irrfan Khan, along with the film's producer Dinesh Vijan and director Homi Adajania was shared on the official Instagram account of Maddock Films. ICYMI, here's the post we are referring to:

Angrezi Medium is the second installment of the 2017 film Hindi Medium, which featured Irrfan and Saba Qamar.

Angrezi Medium will be Irrfan Khan's first film after being diagnosed with neuroendocrine tumour. He was last seen in the 2018 film Karwaan, co-starring Dulquer Salmaan and Mithila Palkar.