Inside Trishala Dutt's Much 'Needed Break' In Italy. See Pic 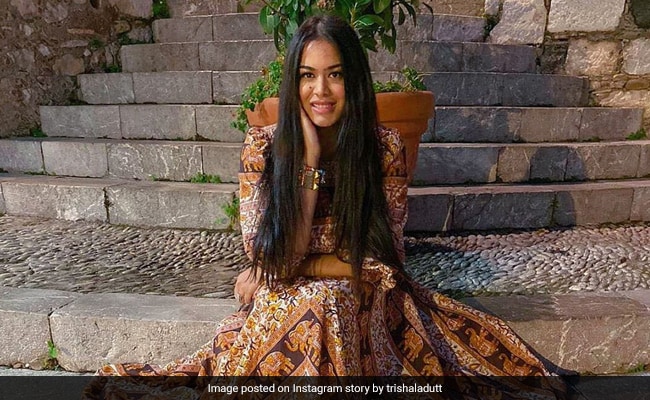 Sanjay Dutt's daughter Trishala Dutt has been actively sharing pictures and videos from her vacation in Italy on her Instagram stories. On Tuesday, the 31-year-old posted stunning picture of herself from Taormina, Italy. In the photograph, she can be seen happily posing for the camera as she sits dressed in a floor-length printed outfit. Trishala can be seen smiling with all her heart. She captioned the post: "Leave me here forever." Just like us, Trishala's Instafam also loved her post and comments like "gorgeous" and "looking fabulous" were seen on her post. Sanjay Dutt's wife Maanyata also posted several heart emojis in the comments section.

Ahead of her vacation, Trishala posted a chic picture of herself from the John F Kennedy International airport, in which she could be seen posing along with her luggage. She captioned the post: "I need a break." This is what we are talking about:

I need a break #brb

Earlier this year, Trishala announced the news of her boyfriend's death on social media by sharing an emotional note. An excerpt from her post read, "You will live in me for eternity. I love you and I will miss you. Until we meet again. Forever yours, your Bella Mia. RIP. I love you more today than yesterday but not as much as tomorrow."

Thank you for loving me, protecting me, and taking care of me. You have made me the happiest I've ever been in my life. I'm the luckiest girl in the world to have met you & beyond blessed to have been yours. You will live in me for eternity. I love you & I will miss you. Until we meet again. Forever yours, xx your Bella Mia #RIP October 07, 1986 - July 02, 2019"I love you more today than yesterday but not as much as tomorrow"

Trishala Dutt is actor Sanjay Dutt's daughter with his first wife Richa Sharma, who died of brain tumour in 1996. She stays with her grandparents in the Unites States Of America. Sanjay Dutt is now married to Maanyata and the couple are parents to 8-year-old twins Shahraan and Iqra.