"There's no greater joy for me than spending time with my precious, Shahraan and Iqra," wrote Sanjay Dutt 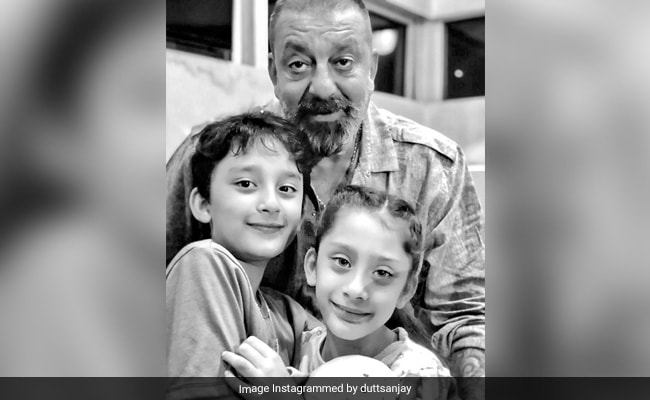 On his kids Shahraan and Iqra's 9th birthday, Sanjay Dutt posted the sweetest birthday post on his Instagram profile. On Monday, the 60-year-old actor picked an absolutely lovely greyscale photograph of himself along with his kids and he accompanied it with an equally adorable caption. Sanjay Dutt wrote: "There's no greater joy for me than spending time with my precious, Shahraan and Iqra. I love you both. Happy birthday." He added the hashtag #ProudFather to the post. Sanjay Dutt married Maanyata on February 7, 2008 in a private wedding in Goa and after two years, the couple welcomed twins - Shahraan and Iqra on 21 October 2010.

There's no greater joy for me than spending time with my precious, Shahraan & Iqra. I love you both. Happy birthday #ProudDad

Meanwhile, Maanyata Dutt gave her Instafam a sneak peek into Iqra and Shahraan's birthday celebrations. In the picture shared by her, the duo could be seen standing in front on their birthday cakes. The caption on her post read, "Happiest birthday to my darling babies. God bless you always with the choicest of blessings ever." She added the hashtags #9thbirthday #lifelines #love #grace #positivity #dutts #beautifullife to her post.

Both Sanjay and Maanyata frequently post pictures of their kids on their Instagram profiles and we simply love it when that happens. Here are some of the posts:

Here's wishing every one a wonderful year ahead ...cheers to the 2019 and another chance to achieve our dreams #happynewyear #2k19 #zayanuraiisland #love #grace #positivity #dubai #dutts #beautifullife #thankyougod

On the work front, Sanjay Dutt was last seen in Deva Katta's Prassthanam, which also featured Jackie Shroff, Manisha Koirala, Ali Fazal, Chunky Panday, Amyra Dastur and Satyajeet Dubey. The actor has several films in the pipeline, which include Bhuj: The Pride Of India, Shamshera, Sadak 2 and Panipat.