Maanyata Dutt's post was replete with birthday wishes for the kids 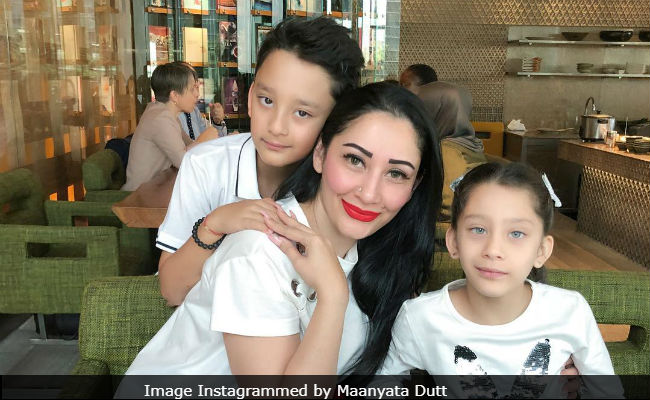 On her children Shahraan and Iqra's eighth birthday, Maanyata Dutt shared an adorable picture of herself along with her twin kids on her Instagram profile. In the picture, Shahraan can be seen resting his hands on his mother's shoulder, while Iqra can be seen smiling at the camera. Maanyata captioned the post: "Happy birthday my babies. Birthday lunch, 8 years old." She accompanied the post along with hashtags such as "#proudmom," "#beautifullife," #thankyougod." The picture received over 32,000 likes on Instagram and it was replete with birthday wishes for the twins. Comments such as "happy birthday cuties" and "such adorable twins," were seen on the comments section.

Maanyata Dutt is often seen documenting her love for her children on social media. Shahraan and Iqra are frequently spotted on Maanyata Dutt's Instagram profile. Remember the picture, in which they could be seen posing with their father Sanjay. She captioned the post: "Ruk jaana nahin tu kahin haar kar... kaaton pe chalke milenge saaye bahaar ke."

Remember her Mother's Day special post, featuring Shahraan and Iqra? In the picture, the twins could be seen dressed in colour co-ordinated yellow outfits. She captioned the post: "Alone we are strong... together we are stronger."

Maanyata Dutt also shares a good equation with Sanjay Dutt's daughter Trishala(Sanjay Dutt's daughter with first wife Richa Sharma). Trishala and Maanyata are almost always spotted having social media exchanges - the two closely follow each other on Instagram and 'like' and comment on each other's posts. On Trishala's birthday, Maanyata wished her on her on social media.

Maanyata Dutt got married to actor Sanjay Dutt on Februray 7, 2008 in a private ceremony in Goa.