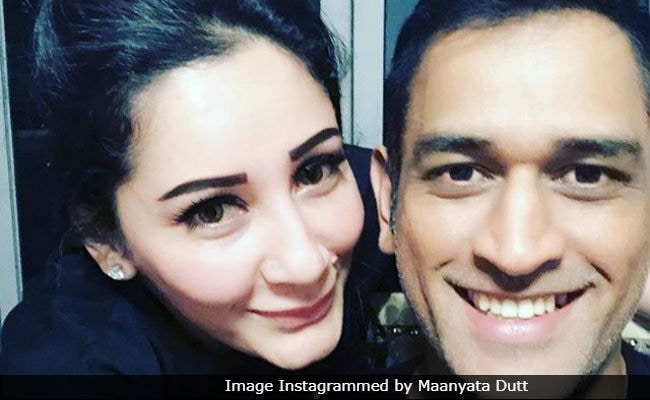 What happens when you bump into the "Pride of the Nation" during a holiday? You pose for a selfie. Atleast that's what Sanjay Dutt's wife Maanyata Dutt did. Maanyata, who is currently on a vacation in Dubai, ran into Indian cricketer Mahendra Singh Dhoni. Maanyata shared the picture on her Instagram account on Tuesday and wrote: "MSD and MSD." Maanyata has never specified her middle name. However, her fans guessed it to be Maanyata Sanjay Dutt. In the picture, the duo can be seen twinning in black t-shirts. Maanyata accompanied the post with hashtags such as "aboutlastnight," "twinning," "prideofnation" and "gamechanger" among others. The picture received over 63,000 likes on Instagram and several comments such as "mind blowing jodi" and " both are looking super cool" were seen on the post.

Maanyata Dutt seems to be making most of her me time in Dubai (going by her recent Instagram posts). Maanyata has been keeping her Instafam engaged by sharing pictures from her Dubai vacation. A few days ago, Maanyata shared a picture of herself ( which appears to be from a hotel), in which she could be seen dressed in blue outfit and she looked absolutely stunning. She captioned the picture: "We are born to be real and not perfect. Long work day ended. Wednesday wings."

Last week, Maanyata shared another picture of herself, in which she could be seen posing with a hair dryer. Maanyata accompanied the post along with a hillarious caption and wrote: "Life is short.....make each hair flip fabulous."

Maanyata Dutt got married to actor Sanjay Dutt on Februray 7, 2008 in a private ceremony in Goa. The couple is parents to eight-year-old twins Shahraan and Iqra.