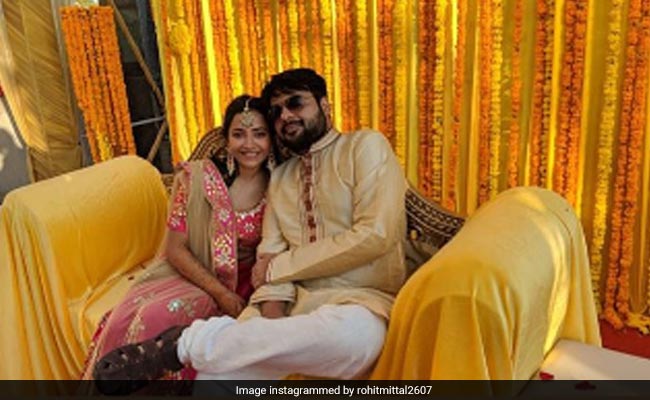 The big day has finally arrived for actress Shweta Basu Prasad and her longtime boyfriend Rohit Mittal, who will be getting married in Pune (Rohit's hometown) today. The shaadi festivities are in full swing and the bride-to-be is having the time of her life. Photos from Shweta's pre-wedding functions were shared on fan clubs on Wednesday. For the mehendi ceremony, which took place on Wednesday, Shweta wore a pink lehenga while Rohit complemented her in a cream and white kurta and pyjama. According to reports, the wedding will be conducted as per Bengali and Marwari rituals. Shweta Basu Prasad and Rohit Mittal's wedding will be a private affair, which will be attended by close friends and family members.

For her bachelorette, Shweta Basu Prasad had gone to Bali with her friends. Shweta and her friends had a gala time at the beach and the actress shared glimpses from her vacation on her Instagram timeline.

The picture is a little blur, but you get it! Thank you @surmittal for these T-shirts, my sister-in-law AND bridesmaid. What a unique friend you are!

Actress Shweta Basu Prasad, who was last seen in Alia Bhatt and Varun Dhawan's Badrinath Ki Dulhania, got engaged to her longtime boyfriend Rohit Mittal in 2017. A Times Of India report had stated that Anurag Kashyap was instrumental in bringing them together. "The two have been together for four years now and got engaged last year. Both belong to the film fraternity and have collaborated on short films. Not many know that filmmaker Anurag Kashyap was instrumental in getting the two together as both Shweta and Rohit are close to him," A TOI report stated.

Shweta Basu Prasad, 27, is best known for her performance as a child artiste in 2002 film Makdee. She also won a National Award for the film. As a child artiste, Shweta had appeared in several TV shows like Kutumb, Kahaani Ghar Ghar Kii and Karishma Kaa Karishma. The actress was recently seen in Chandra Nandini.