Inside Shilpa Shetty's Fam-Jam With Raj Kundra, Viaan, Shamita And Others

Shilpa Shetty shared a sneak peek of her family's get-together 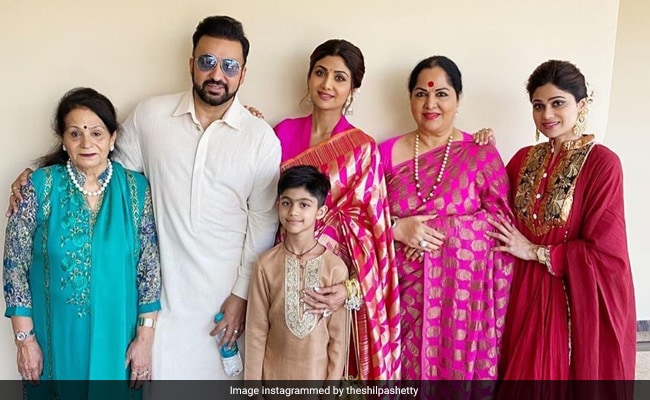 Shilpa Shetty gave her fans a sneak peek of her family get-together on her Instagram profile, on Wednesday night. In one of the photographs, the 44-year-old actress can be seen twinning with her mother Sunanda Shetty. The mother-daughter duo can be seen wearing pink and golden sarees, while Shilpa's sister Shamita can be seen dressed in a traditional red outfit. Another picture also features Shilpa's husband Raj Kundra and son Viaan Raj Kundra. Shilpa accompanied her post along with a caption that read, "With the mother of Shettys. Sunanda Shetty and Shamita Shetty looking fine in all our finery." Take a look at the post here:

In a separate post, Shilpa gave her fans a closer look of her outfit. Shilpa picked a pink and gold saree from the shelves of Ekaya and she accessorised her look with statement earrings from Anmol Jewellers. Check out the picture here:

Earlier this week, Shilpa Shetty took the viral #DollyParton Challenge, as a part of which, she shared a collage comprising four different pictures from different social media platforms - LinkedIn, Facebook, Instagram and Tinder. ICYMI, this is the post we are referring to: