Inside Shakti Kapoor's Birthday With Shraddha, Asha Bhosle And Other Family

"A very special birthday. Nothing like family," wrote Shakti Kapoor 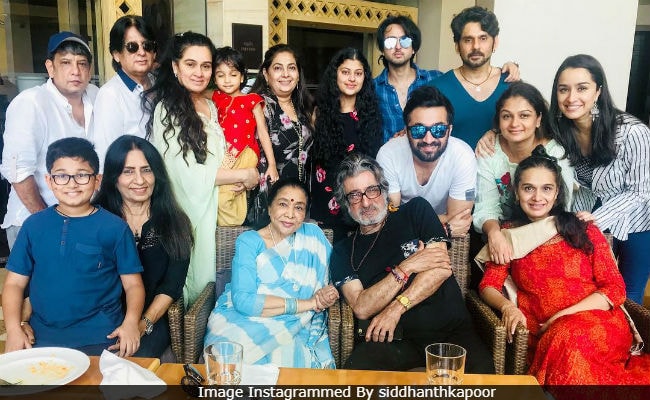 "A very special birthday. Nothing like family," read the caption of actor Shakti Kapoor's latest Instagram post. Shakti Kapoor celebrated his 66th birthday on Monday with wife Shivangi, children Shraddha and Siddhanth. The birthday party was also attended by Shakti Kapoor's sisters-in-law, Padmini Kohlapure and Tejaswini Kolhapure. They came with their families. Singer Asha Bhosle also came to wish the actor. Shivangi, Padmini and Tejaswini Kolhapure's father classical singer Pandit Pandharinath Kolhapure was the cousin of Lata, Usha Mangeshkar and Asha Bhosle. The picture features Asha Bhosle, Shakti Kapoor and Shivangi Kolhapure in the front row while Shraddha, her brother Siddhant and the others pose behind them. Take a look.

Shraddha wished her dad with a picture from last afternoon's party and wrote, "My baapu's birthday." The father-daughter duo just can't take their eyes off each other.

Some days ago, Shraddha shared this picture from their family-only outing. (Missing - Shakti Kapoor).

Padmini, Shivangi and Tejaswini Kolhapure were actresses. However, Padmini Kolhapure had the most successful career in films.

Shakti Kapoor has starred in several Hindi films. He primarily played negative roles in the films. Later, he was seen in many comedy genre films. Shakti Kapoor's performance in Andaaz Apna Apna, as Crime Master Gogo, is one of his most iconic roles. Mawaali, Tohfa, Raja Babu, Andaz Apna Apna and Judwaa are also some of his best-known films.

Meanwhile, Shraddha Kapoor is currently basking in the success of Stree, which released last Friday. She co-starred with Rajkummar Rao in Stree. Her upcoming film is Batti Gul Meter Chalu opposite Shahid Kapoor.