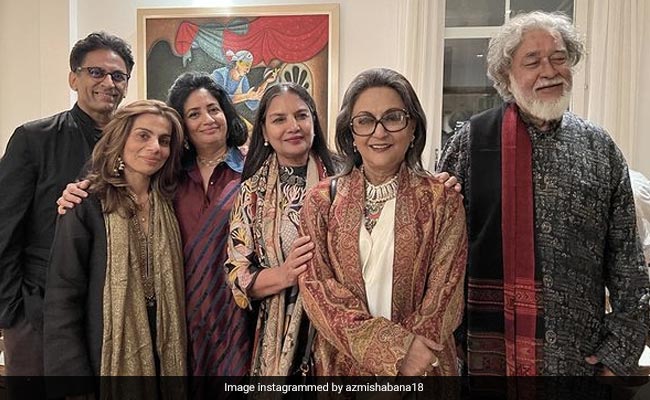 London is the new hotspot for Bollywood celebs. From Shabana Azmi and Kareena Kapoor to Sara Ali Khan and Taapsee Pannu, you might spot many members from the Hindi film fraternity on the streets of London nowadays. Shabana Azmi, who flew to the UK with husband and lyricist Javed Akhtar a few days ago, met an old friend and colleague in the capital city of England. Shabana Azmi posted a photo with renowned Bengali actress-filmmaker Aparna Sen and thrilled the Internet. In case you didn't know, the two legendary stars have worked together in a couple of films. In Mrinal Sen's 1989 film Ek Din Achanak, the duo shared screen space. Many years later, in 2017, Aparna Sen and Shabana Azmi co-starred in Sonata. It was directed by Aparna Sen. They also featured in Dev Benegal's documentary Shabana! Actor, Activist, Woman.

Sharing the photo on Thursday, Shabana Azmi wrote: “Friends meet up in London.” She can be seen standing behind Aparna Sen and holding the Bengali star by her shoulder and arm in the picture. The frame also features Aparna's husband Kalyan Ray.

Fans were excited to see the two esteemed stars in one frame.

Five times National Award-winner Shabana Azmi has worked in over 100 films. The actress, who is also a renowned theatre artiste, made her debut with the 1974 movie Ankur, for which she won her first National Award for Best Actress. She has featured in critically-acclaimed films like Arth, Bhavna, Neerja, Khandar, Masoom, Paar, Tehzeeb, Godmother, Fire and Sati among many others. She has also been honoured with the Padma Shri and Rajiv Gandhi Award.

A few days back, Shabana Azmi announced on Instagram that Aparna Sen along with her daughter, actress Konkona Sen Sharma are in London. Along with a beautiful picture, she wrote, “All of Mumbai has descended on London. Manish Malhotra, Ram and Amita Madhwani… Shahid Kapoor with family. Shibani Dandekar and Farhan Akhtar… Deepak Parekh…Anurag Kashyap…Taapsee Pannu… Nandita Das, Konkona Sen and Aparna Sen from Kolkata for good measure. And of course, yours truly and Javed Akhtar.

Shabana Azmi will be next seen in Ghoomar.