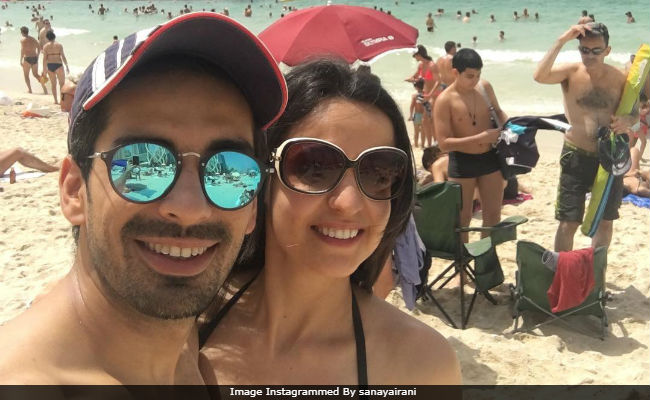 New Delhi: Television stars Sanaya Irani and Mohit Sehgal are currently enjoying a holiday in Dubai. The couple landed in Dubai last week to attend the premiere of Sanaya's newly-released short film Dum Dum Dumroo and later she seems to have turned the work trip into a brief holiday. Sanaya and Mohit's travel itinerary includes a visit to the beach, sky diving and desert safari. (Sanaya also rode an ATV and Mohit shared a hilarious video of hers). "My most favourite place in the world the beach with my most favourite person," Sanaya captioned a post. See the pictures from Sanaya Irani and Mohit Sehgal's Dubai diaries here.

When wifey @sanayairani rides ATV like a doodwali and thinks she is killing it .

At Roxy cinema for #dumdumdumroo premier in Dubai .

In Dum Dum Dumroo, Sanaya Irani co-stars with actor Anil Charanjeett. Of the short film, she had earlier told Hindustan Times, "It's a film at the end of which you will learn something. I can't say anything about it now, as it will give out the plot. It has a mixture of everything - comedy, surprise, teasing the viewers with what is going to happen next."

Now Watch #dumdumdumroo before anyone else in $1 and support the social cause of donating 60 % of the revenue for underprivileged kids. Watch now on Vimeo. Hurry valid only till Apr 7 & 8 before YouTube release on April 9 https://t.co/bqGTs052Vj

Promoted
Listen to the latest songs, only on JioSaavn.com
Sanaya Irani, 34, and Mohit Sehgal, 32, married in January 2016. The couple first met on the sets of TV show Miley Jab Hum Tum and fell in love there. They dated for about six year before marrying in Goa.

Sanaya has been part of shows like Iss Pyaar Ko Kya Naam Doon? (opposite Barun Sobti) and Rangrasiya while Mohit has starred in serials like Qubool Hai and Love Ka Hai Intezaar. Last year, the couple together participated in the reality show Nach Baliye 8.