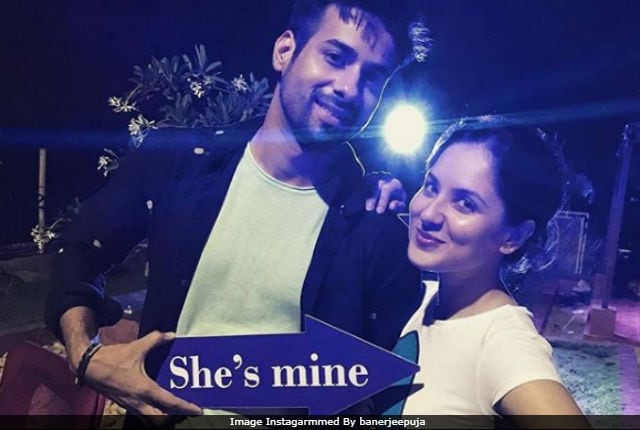 New Delhi: Television actors Puja Banerjee and Kunal Verma got engaged in a lavish ceremony on Wednesday in Mumbai. Pictures from the event were shared by Anita Hassanandani, Shweta Rohira and Bharti Singh. Puja and Kunal have been in a relationship for nine years now and first met on the sets of their 2008 television show Tujh Sang Preet Lagayi Sajna. Puja looked beautiful in a green and pink lehenga and accentuated her look with kundan jewellery while Kunal complemented her in a dark green sherwani. Shashank Vyas, Adaa Khan and Maniesh Paul also attended their engagement ceremony. Here are some pictures.

Fan clubs have also shared videos from inside the ceremony.

Puja had revealed her engagement date on Instagram last month. She shared a cute picture of herself with Kunal and wrote, "I can't tell you how much I love you and how I am counting days to be yours forever. Finally after 9 long years of our relationship we gonna exchange rings on 16th Aug. The countdown begins now."

I cant tell u how much I love u and how I am counting days to be urs forever. U make me smile when i have tears in my eyes u pamper me like a queen and u be there for me when I need the most. I love u forever and ever and ever. Finally after 9long years of our relationship we gonna exchange rings on 16th Aug. The countdown begins now @kunalrverma

Promoted
Listen to the latest songs, only on JioSaavn.com
Meanwhile, of the wedding plans, Puja told Indian Express, "We are getting engaged after nine years of being together. We will decide our wedding date on the day of engagement only. It was supposed to be a roka but after we prepared the guest list it, Kunal thought that let's turn it into a proper engagement ceremony since the marriage will be a private affair. We won't be inviting many people then and it will only be a family affair. So we decided to celebrate one function with everyone."