The wedding is slated to take place today in Mahabaleshwar 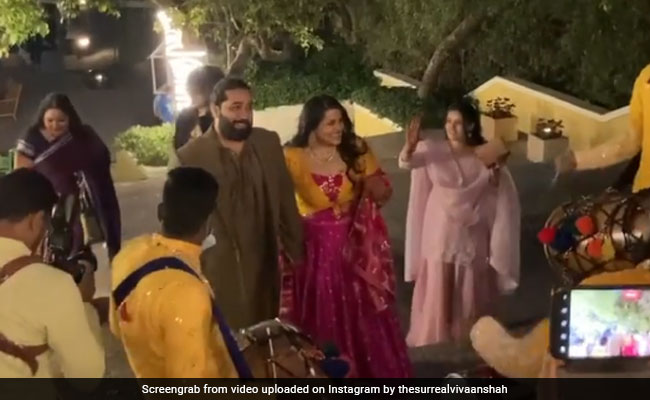 Sanah Kapoor and Mayank in a still from the video. (courtesy: thesurrealvivaanshah)

Sanah Kapur, daughter of veteran actors Pankaj Kapur and Supriya Pathak, is all set to get married today in Mahabaleshwar, Maharashtra, an ETimes report stated. Sanah's dad Pankaj Kapur confirmed the news of her wedding to ETimes and said, "I don't want to talk much about this, but yes it is my daughter's wedding and that's about it." Sanah will marry actors Manoj Pahwa and Seema Pahwa's son Mayank Pahwa. Sanah's cousin and actor Vivaan Shah (son of Naseeruddin Shah, Ratna Pathak Shah), shared a video of the couple from their wedding festivities and he captioned it: "Congratulationssss Sanah Kapur, Mayank Pahwa. Love you'll Baa would have been soooop proud Sanuuu." He added multiple heart and hug emojis in the caption.

Check out the video posted by Vivaan Shah here:

Shahid Kapoor, son of actors Pankaj Kapur and Neelima Azeem, is a star of critically acclaimed as well as hit films like Udta Punjab, Haider, Jab We Met, "Padmaavat" and Ishq Vishk. His last film was the 2019 hit Kabir Singh, co-starring Kiara Advani.