Kim Sharma And Leander Paes, Together For A Year Now, Reveal Nicknames For Each Other

The snapshots are all things cute. 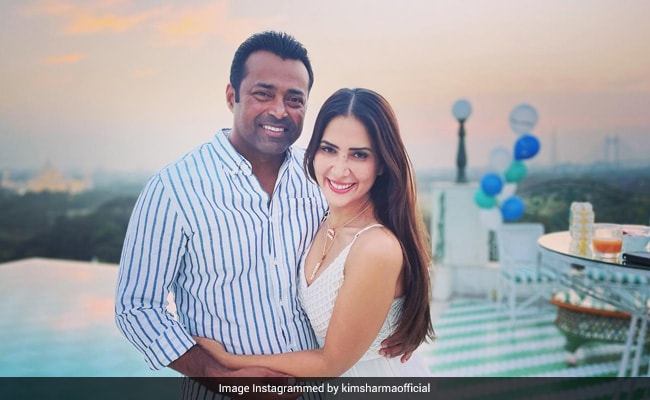 Kim Sharma and Leander Paes have been making headlines ever since they got into a relationship. Fans keep gushing about this adorable couple. Now, Kim Sharma and the legendary tennis player have given us a chance to rave about them even more. After all, the celebrity couple turned one on Monday. And, the two can't keep calm. Kim Sharma and Leander Paes have written heartwarming notes to mark the day. Along with a beautiful set of pictures, she wrote, "Happy anniversary, Charles. 365 days. Endless moments of happiness and learning. Thank you for being mine. Love you to bits - Mich." The snapshots are all things cute. And, actress Amrita Arora seems to agree with us here. She has expressed her love for the two via a bunch of red heart emojis. Kim Sharma's Mohabbatein co-star Preeti Jhangiani wrote, “Haha love the last one. Happy Anniversary.” Film writer Mushtaq Shiekh has also sent his warmest greetings. “Mubarak ho love birds,” his message read.

And, Leander Paes did not miss the chance to leave a heartfelt note for Kim Sharma. From their food outings to holidays, the photos will surely take you on a joy ride. Can it get any better? Yes, the caption. "Happy anniversary, Mich. Thank you for 365 days of memories and for riding through life's learnings together every day. You had me at hello," the tennis sensation wrote.

Kim Sharma and Leander Paes always make it a point to celebrate special occasions in the best way possible. For her birthday, Kim Sharma jetted off to the Bahamas to mark the day. Travel companion? Of course, Leander Paes. Kim posted a photo from the beach outing and gave the photo credits to her beau. Adorable, isn't it? She captioned the image, "Mood for 2022. Best day with my best person in paradise. This year could just be the best so far. Happy birthday to me." Leander Paes also left a birthday wish for her on his social media page.

On the work front, Kim Sharma was last seen in Sushmita Sen's Zindaggi Rocks, which was released in 2006. She made her Bollywood debut with the 2000 film Mohabbatein. She also made a special appearance in SS Rajamouli's Magadheera, which starred Ram Charan.