It was a reunion of sorts for Kareena, Karisma and Rhea Kapoor 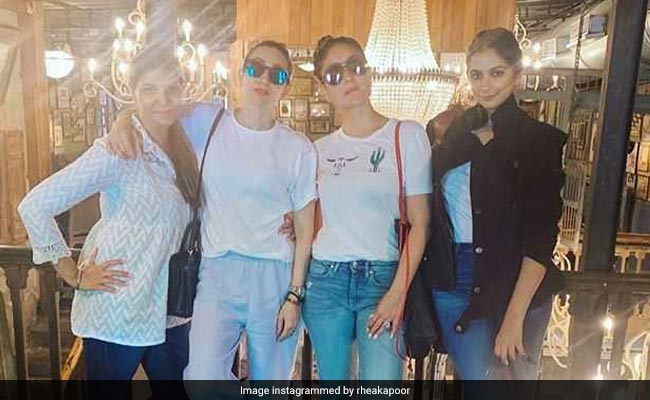 Kareena Kapoor managed to scoop time of her busy schedule and had lunch with her "veeres" Karisma Kapoor, filmmaker Rhea Kapoor and Poonam Damania (Kareena's manager). We got a glimpse of their get-together through Rhea and Karisma's Instagram entries. Rhea Kapoor shared a picture of herself along with the Kapoor sisters and Poonam Damania on her Instagram profile on Monday. In the picture, the quartet could be seen happily posing in colour-coordinated white outfits. However, Rhea wore a black jacket over a white top. "Veere mini reunion.. Missed you Sonam Kapoor, Swara Bhasker, Shikha Talsania and mostly you Mickey Contractor," read the caption on Rhea Kapoor's Instagram post.

Sonam Kapoor and Swara Bhasker have not reacted to Rhea's post as of now but we'd love to see their response. Shikha Talsania left heart emojis in the comments section, while Mickey Contractor wrote: "Hope you girls had a blast." Take a look at Rhea Kapoor's post here:

Karisma Kapoor shared a seperate picture from the get-together on her Instagram profile and she captioned it: "Veere's fun lunch." Check put the post here:

Kareena Kapoor, Karisma, Sonam Kapoor and Rhea are part of a close-knit friend circle. The quartet even went on a vacation to London in June last year.

With these lovelies #londondiaries #summertime

On the work front, Kareena Kapoor was last seen in Veere Di Wedding, produced by Rhea Kapoor. She will next be seen in Good News, opposite Akshay Kumar and Karan Johar's Takht, in which she will be paired opposite Ranveer Singh.